What is bullfighting? This Spanish tradition is a performance in which a bullfighter faces a bull according to a set of rules and guidelines.

The Spanish bullfight is a fight to the death between a man and bull.

Actually, it’s much more than that.

Bullfighting is part of the cultural heritage of Spain and some other countries, and it’s entrenched in Spanish history, providing also a very popular identity ground in the country.

But before we start…

The Spanish word for bullfighting is corrida de toros that can be literally translated as “running of bulls”.

A bullfight is always held in a round-shape arena or venue called plaza de toros.

Bull fighting in Spain is an iconic tradition in which 3 toreros have to fight 2 bulls each and, ultimately, kill them. So if you decide to attend a bullfight, you’ll see a total of 6 fights.

The matadores perform in order of seniority, which is set according to the date of each matador‘s alternativa. More on this ceremony below.

Thus, the senior one will participate in the first and fourth fights. Then, the second oldest matador will confront the second and fifth bulls. Finally, the least experienced will fight in third and sixth place.

If a matador is gored or injured in any way that prevents him to continue, the senior matador must replace him and complete the fight.

There are two different types of bullfights.

The most common one is the corrida a pie (on foot) in which the matador fights the bull face to face on the arena.

Among the corridas a pie you can watch:

However, there is also the spectacular corrida de rejones in which the matador, called rejoneador, fights the bull on horseback.

The only major difference is the way of fighting the bull and the rejoneador’s clothes.

On foot the matador look more elegant, while on horseback the rejoneador wears a more casual and countryside outfit. A rejoneador‘s usual costume consists of a dark waistcoat (usually brown or grey), brown leather chaps and a broad, straight-brimmed hat.

Other than that, the corrida follows the same structure.

How is a corrida de toros structured?

Every bullfight follows the same pattern and is organized identically. Generally speaking, bullfighting is a very strict event and its participants must respect certain rules at all times.

The event starts with the paseíllo, a parade of all the participants. It’s basically a presentation of the matadores and the rest of their team.

Once the paseíllo is over, the matadores are ready to start their fights – one at a time and following a certain order. Remember that you’ll watch a total of 6 fights – two per matador, and that the senior matador goes first.

Every bullfight (also called lidia), each of the fights that you’re about to watch, lasts between 20 and 25 minutes approximately.

Once the bull has been killed at the end of each fight, the matador may receive an award if his performance has been outstanding.

After killing the sixth and final bull, the three matador teams salute the president before parading again across the middle of the ring and out of the arena.

What are the 3 stages of bullfighting?

A fight against a bull is divided into three tercios or stages. Each one starts and ends after a member of the music band blows a bugle.

Each stage lasts around 8-10 minutes and the matador, who is the one in charge of asking for a change of tercio, must respect the timings or the president will warn him.

The order is always the same:

Once the bull is dead, the fight is over and the matador is eventually rewarded if his faena was exceptional. Then, the next matador enters the scene to fight the following bull.

The same sequence goes on until the sixth bull is dead.

The matador‘s rite of passage

He begins as a novillero

You will easily recognize novilleros because they wear silver braid.

Before becoming an acknowledged matador, the novillero has to perform at least 25 fights without picadores. In these fights, bulls are between 2 and 3 years old.

He them moves on to fighting older bulls (between 3 and 4 years old), this time with picadores.

He then receives the alternativa

The alternativa is the transition from novillero and professional matador. It can take place in any bullring around the world, regardless of its category.

For this occasion, the aspirant novillero is finally allowed to wear gold braid.

The short ceremony takes place at the beginning of the first bull’s tercio de muerte, right before the about to become matador starts his faena.

The senior matador (the one who received the alternativa first of the three matadores present in the bullring) acts as padrino (godfather) to the newcomer. He hands him the estoque (sword) and the muleta (red cape) along with a few words of wisdom and encouragement.

The second most experienced matador acts as a testigo (witness) to the occasion.

The only difference between a bullfight in which an alternativa takes places and a regular fight is the order in which each fight takes place:

Finally, he gets his confirmación

The confirmación de alternativa is the act by which the bullfighter validates his alternativa.

This happens the day that the matador acts for the first time, after taking the alternative, at the Plaza de Las Ventas (Madrid).

What are the differences in a corrida de rejones? 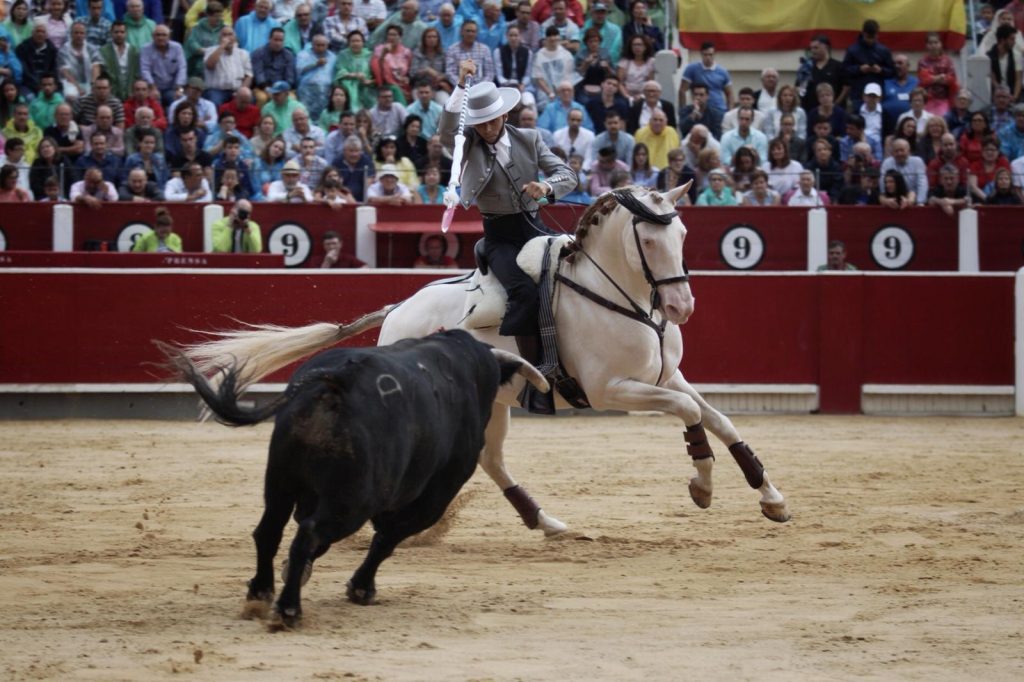 Not many, really. The main one as I previously explained, is that the rejoneador or mounted bullfighter fights on horseback, assisted by subalternos (secondary bullfighters) on foot.

As in a corrida on foot, the rejoneador receives the bull after it enters the ring.

He or she tries to provoke the bull to attack and run after the galloping horse (as in the matadores do with their capote).

Similarly to a regular one, a corrida de rejones is also divided into three stages.

He then stabs one or two of rejones de castigo (punishment lances of) into the bull’s back. As with the puyazos of a standard corrida, the rejones de castigo weaken the bull through blood loss to allow a less dangerous confrontation between the rejoneador and the bull.

At the same time, in a corrida de rejones, the rejoneador places up to six banderillas (also called rosetas). This tercio is exactly the same as the tercio de banderillas in classic bullfighting. The rejoneador may also use smaller banderillas to show his ability to approach the bull.

However, it’s during this stage that the rejoneador displays his skill and nerve, making the performance a spectacle similar to the matador’s faena during the tercio de muerte. The rejoneador may even decide to touch the bull’s head while it charges and pirouettes and other equestrian tricks.

The tercio de bandilleras is where the public will most evaluate the rejoneador performance.

Ideally, the bull dies quickly and cleanly. However, on some occasions the bullfighter will need a second attempt.

Is it always the same horse?

A rejoneador often use several horses during a performance. They are of various single and mixed breeds.

Typically the rider has at least one of each of the following horses:

The horses are extremely well trained in dressage.