A brief history of bull fighting in Spain 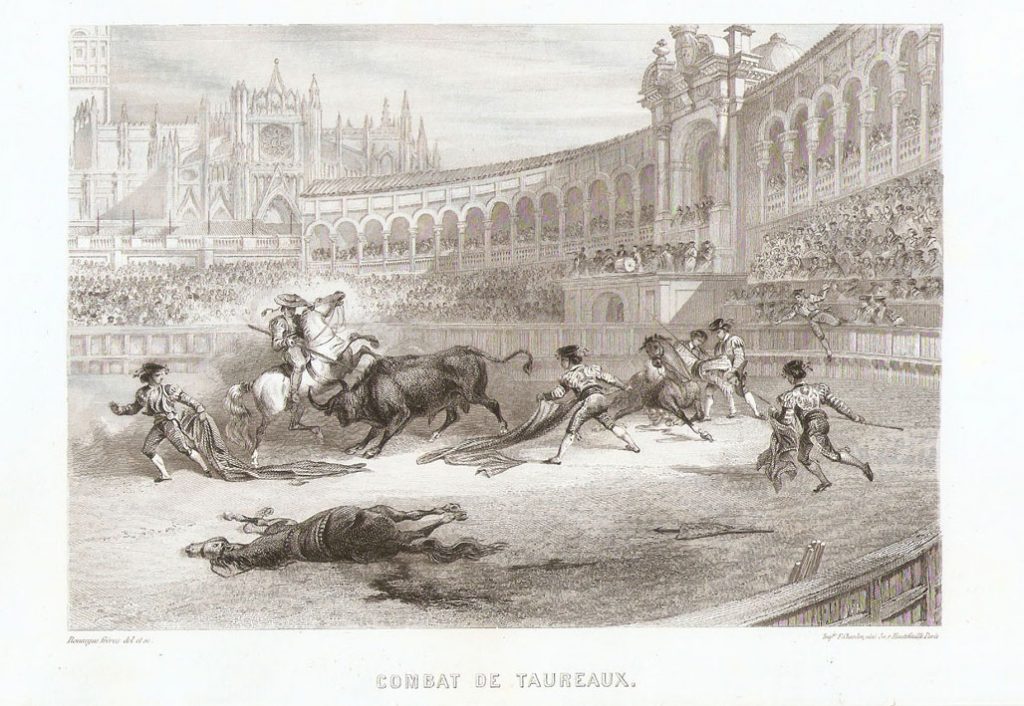 Bull fighting in Spain has been at the heart of culture for centuries. From the prehistoric bull worship and sacrifice to the modern bullfights, this is probably one of the best-known popular customs around the world.

Bullfights are considered one of the symbols of the Hispanic culture. They are not only organized in Spain but also in Portugal, France and part of Latin America, where some customs may vary. However, Spain has the longest season and it is the country in which most of the bullfights take place.

The origin of bullfighting

When did bullfighting start?

Prehistoric bull worship and sacrifice took place in Mesopotamia and the Mediterranean region. As a matter of fact, bulls started to play an important role in religious ceremonies.

Then, Greeks introduced fights against bulls as a spectacle.

Proof of this is a fresco dating from about 2000 BC that was discovered at a location called Knossos, in Crete (Greece). Knossos is the largest Bronze Age archaeological site on Crete and has been called Europe’s oldest city. The fresco shows male and female acrobats confronting a bull, grabbing its horns as it charges and vaulting over its back.

Later on public fights between animals and men were common-place in Ancient Rome. And as you can imagine, they spread to the Iberian Peninsula through the expansion of the Roman Empire.

A history of bull fighting in Spain

The powerful Almohad caliphs who ruled Andalucía in the 12th century apparently enjoyed the spectacle.

And so did Alfonso VII de León y Castilla (1105-1157), who is said to have put on bullfights to celebrate his wedding to Berengaria de Barcelona in 1128.

In the Middle Age the bull simply was released into a town or village square, in which the aristocrat (acting as the matador) would then fight the animal from horseback with a long lance.

In these medieval bullfights there were often individuals who were in charge of finishing off the animal and who were called matatoros (killers of bulls). In the north of Spain, this profession became very well paid and esteemed, and some monarchs even hired them for their festivities.

However, Alfonso X de Castilla (1252-1284) ruled in his statutory code, called the Siete Partidas (or Seven-Part Code), against such public entertainers as jugglers, actors, musicians, and matatoros (killers of bulls). It was considered a dishonor to receive any type of economic remuneration for killing bulls, as it was a pastime exclusive to the upper classes.

Experts consider that modern Spanish bullfighting started in 1726 when Francisco Romero, a significant matador from Ronda, introduced the use of the sword (estoque) and the famous red cape (muleta) into the bullfight. After this exploit, humble people started to practice it on foot.

In 1729, the first appearance of 3 professional bullfighters with a supporting team (the cuadrilla) took place.

By the end of the 18th century the demand for the bullfight increased in popularity amongst the general public. This led to a lost of the exclusive right to fight bulls that the nobility had. Bullfighting started to become a respectable and honorable profession at last.

At the beginning of the 19th century the bullfight used to be an all day event: 12 to 14 bull were fought in two sessions (morning and evening).

Little by little the media corrida (half a bullfight), comprising of 6 to 8 bulls, began to be accepted as the norm. By 1825 it had replaced the all day event.

Bullfighter Francisco Montes, popularly known as Paquiro, published “Tauromaquia” in 1836. This masterpiece set out the rules and regulation of the fight and stipulating the dimensions of the bullring.

In 1859, the first bullring following this rules was built in Valencia.

In 1868, the first performance of what is considered the current day bullfighting (6 bulls and 3 matadores with cuadrillas) took place.

Juan Belmonte (1892-1962), a rogue and a rebel born into a large gypsy family in Triana (Seville), introduced the modern style of Spanish bullfighting.

When he wasn’t looking after his father’s market stall, which was often the case, he would hang around on the Alameda de Hércules with his friends, smoking, and dreaming of becoming a great bullfighter.

At night, the gang would go to the countryside to sneak in to the bull-breeding ranches. There, they would use their coats as capes and confront the bulls. Belmonte and the rest had to pay a price – they were often hurt and chased away by armed farmers.

Once he became a professional, Juan Belmonte introduced a daring and revolutionary style. He stood within a few centimeters of the bull throughout the fight, unlike previous matadores, who stayed far from the animal to avoid the horns.

He is generally considered the greatest torero of all time.

The Golden Age of bullfighting: a rivalry between two kings

Just like Belmonte, José Gómez Ortega had been born into a big gypsy family in Gelves (Seville). His grandfather, father, uncle and brothers were bull fighters, and his widowed mother, a flamenco singer, tried everything to keep him out of the bullring.

Being a member of the famous bullfighting dynasty “Los Gallo” (The Roosters), he was initially called Gallito and later on Joselito El Gallo. When Joselito was 6, he was considered a child prodigy of bullfighting. And by the time he was 12, Joselito was performing professionally.

Until 1913 Joselito did not encounter a challenging competitor. He was a classic matador and he respected the foundations of the tauromaquia (bullfighting).

But, by the oddest quirk of fate, the revolutionary Juan Belmonte would soon enter the picture to break the status quo, altering every single prevalent concept of bullfighting.

The two men’s styles could hardly have been more different. Joselito was graceful, while Belmonte was daring. Where Joselito moved like a ballet dancer, Belmonte didn’t move at all.

Both turned toreo from a spectacle into an art and the period between 1914 and 1920 is known to aficionados as the Golden Age.

The Golden Age ended suddenly when Joselito was fatally gored on May 16, 1920 at a bullfight in Talavera de la Reina (Toledo).

Bailador, the fifth bull of the afternoon, was not a particularly complicated bull to fight. Nevertheless, he was also what toreros call burriciego: purblind.

Everything happened in just a few seconds.

Joselito was a few meters away to readjust his muleta when Bailador suddenly broke away and charged at him from behind. Just like he had done a million times, he waved the muleta to distract the bull.

But, he forgot about Bailador’s blindness, and the bull didn’t see the red cloth. It ripped him open.

It was a tragedy that even the New York Times published.

Curiously enough, it turned out that their professional rivalry did not prevent their developing a close personal friendship.

Experts claim that without Joselito and Belmonte, everything would have been very different. Perhaps, the bullfighting would have stagnated, and who knows if it would have even disappeared…