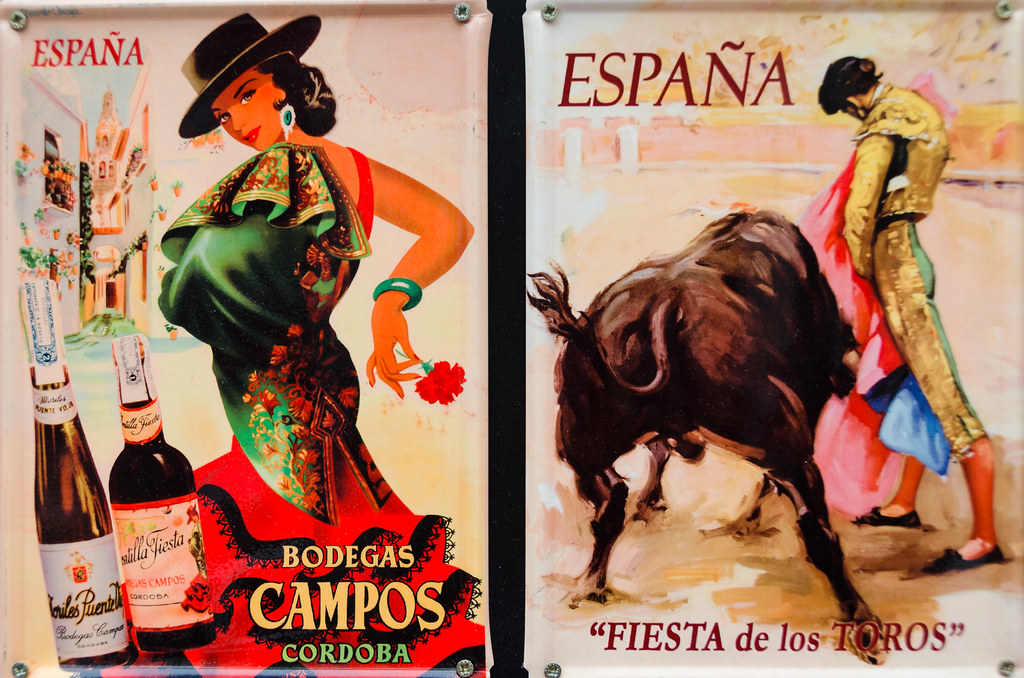 Ernest Hemingway was a master using bullfighting terms and described a corrida as “the only art in which the artist is in danger of death and in which the degree of brilliance in the performance is left to the fighter’s honor” in Death in the Afternoon.

Since you probably don’t know as much as Hemingway did, here is a list with some of the most used bullfighting terms to help you understand what goes on at the plaza and to give you some good insight. And if you want to enjoy it as he did, have a look at some insider tips and suggestions on how to watch a bullfight once you are at the plaza.

Acoso y derribo – Literally, chase and knock down. At the tienta, test of the bulls’ spirit before they go to the ring.

Adorno – Easy move in the ring with no risk for the torero.

Afición – Denotes an informed, opinionated and passionate interest in bullfighting. To have it is to be an initiate in taurine circles.

Aficionado/a – Someone who is fan of anything. Here, it is used specifically of those who have a knowledge of bullfighting.

Alguacilillo – Constable. The President’s representative in the bullring. They are in charge of symbolically picking up the toriles’ key and to hand prizes to matadores.

A porta gayola – A very dangerous pass where the matador kneels before the main gate from which the bull enters the ring.

Apuntillar – To use the puntilla, which is a small dagger.

Arenero – Man in charge of smoothing the sand over before the bull is released.

Arrancar – First of the three stages of making the kill: straight charge at the bull. The second stage is cruzar and the third stage is salida.

Banderillero – Placer of the banderillas (also known as peon).

Burladero – Screen placed in front of the barrera providing matadores and peones a shelter from the bull. Each bullring has four of them.

Cajón – Individual pen in which the bull is transported to the bullring.

Callejón – Narrow passageway between the barrera seats and the arena.

Cambio – Literally, change. Change of direction of bull’s charge. It also designates the moment the matador asks for change of a tercio.

Casta – Quality of breeding of a bull.

Chiquero – Stall where the bull awaits its entrance into the arena.

Citar – To provoke a bull’s attack.

Clavar – To place the banderillas.

Coleta – Torero’s pigtail. Nowadays all of them wear an añadido.

Contrabarrera – Second row of seats in a bullring.

Corrida – Bullfight where bulls are at least four years old.

Cruzar – Second of the three stages of making the kill: sword thrust, with the muleta in the left hand crossing at the same time beneath the sword arm to mark the bull’s salida or direction of exit from the confrontation. The first stage is arrancar and the third stage is salida. Cruzar also refers to “crossing” in front of the animal, in order to reposition it.

Derechazo – A right-hand pass with the muleta.

Desafio – The bull paws the ground and backs up prior to charging.

Desarme – The bull tears the muleta out of the matador’s hand.

Descabellar – Killing bull by stabbing it in the back of the neck using the descabello.

Descabello – Straight sword with a crosspiece near end of the blade.

Encuentro – Both the bull and the matador run towards each other to meet and fight.

Entrar a matar – Act of preparing the sword and kill the bull.

Espada – Sword, but also a synonym of matador.

Estocada – Plunging of the estoque into the bull.

Fijado – Literally, fixed. Describes the fixing of a bull’s head close to the cape during passes.

Gaonera – Pass where the cape is held behind the back and the matador turns as the bulls passes to provoke it to charge again.

Mandar – To dominate and control the bull.

Matador – A killer of bulls.

Medios – Central area of the bullring.

Molinete – Right-handed pass where both the matador and the cape spin as the bull passes.

Monosabio – Literally, wise monkey. The picador’s aide who helps him get on he horse, holds the horse during the suerte de varas and comes to the aid if the picador falls.

Muleta – Small red cape, stiffened with a rod, used by the matador during the suerte de muerte. Only he can use it.

Mulillero – Responsible of the mules used to drag the dead bull out of the arena.

Parado – A tired bull. It is generally cautious, wounded and liable to attack with cunning.

Pase natural – Cape pass to move the cloth across the bull’s leading eye in a noseward direction.

Paseíllo – Parade involving the corrida’s participants except for the bull. It’s the prologue of a bullfight.

Peón – Matador’s assistant in charge of drawing the bull away in case of danger (also known as banderillero).

Peto – Heavy padding protecting the flanks and belly of the picador’s horse.

Picador – Mounted torero armed with a lance (called vara) and charged with piercing the bull during the tercio de varas.

Querencia – A spot in the bullring the bull always returns to. It’s a sign of weakness because it shows that the bull runs away from a confrontation with the torero.

Quite – Drawing-away of the bull by either the matador or a peón.

Rejoneador – A matador fighting a bull from horseback.

Rejoneo – Bullfight in which the matadores fight on horseback.

Remate – A finishing flicking pass to fix the bull in a precise spot at the end of a series.

Rubio – Ideal point for the matador to place his final, killing sword blow.

Rueda de peones – Swaying of peones’ capes in an effort to make the bull move its head from side to side in order that the swords works through an artery.

Salida – Third of the three stages of making the kill: exit of the bull from a pass. The first stage is arrancar and the second stage is cruzar.

Sentido – Bull’s awareness that the matador is his enemy and not the cape.

Sorteo – Raffle whereby the six bulls are assigned to the three matadores.

Suerte de matar – Third and final act of the corrida in which the matador fights the bull alone and kills it (also known as tercio de muerte or faena).

Suerte de varas – First act of the corrida in which the picador confronts the bull with his vara (also known as tercio de varas).

Taleguilla – Short embroidered pant that is part of the traje de luces.

Templar – To govern the pace of the bull’s actions.

Tendillo – Section of seats directly behind the barrera and contrabarrera seats. It includes the rows of seats from the barrera up to, but not the covered gallery at the top of the bullring.

Tercio – Act of the corrida (also known as suerte).

Tienta – Test of immature bulls carried out at the ganadería.

Toreo – The art of fighting a bull.

Torero – Applies to any of the three groups of human participants in a bullfight: the matador who kills the bull, the picador who is mounted and the peones who assist the matador and drive the banderillas. In Spain, often used interchangeably with matador but incorrectly, although it has become common practice.

Toril – Holding pen where the bull is kept prior to its entrance in the ring.

Verónica – A pass involving holding the cape up in front of the body with both hands.