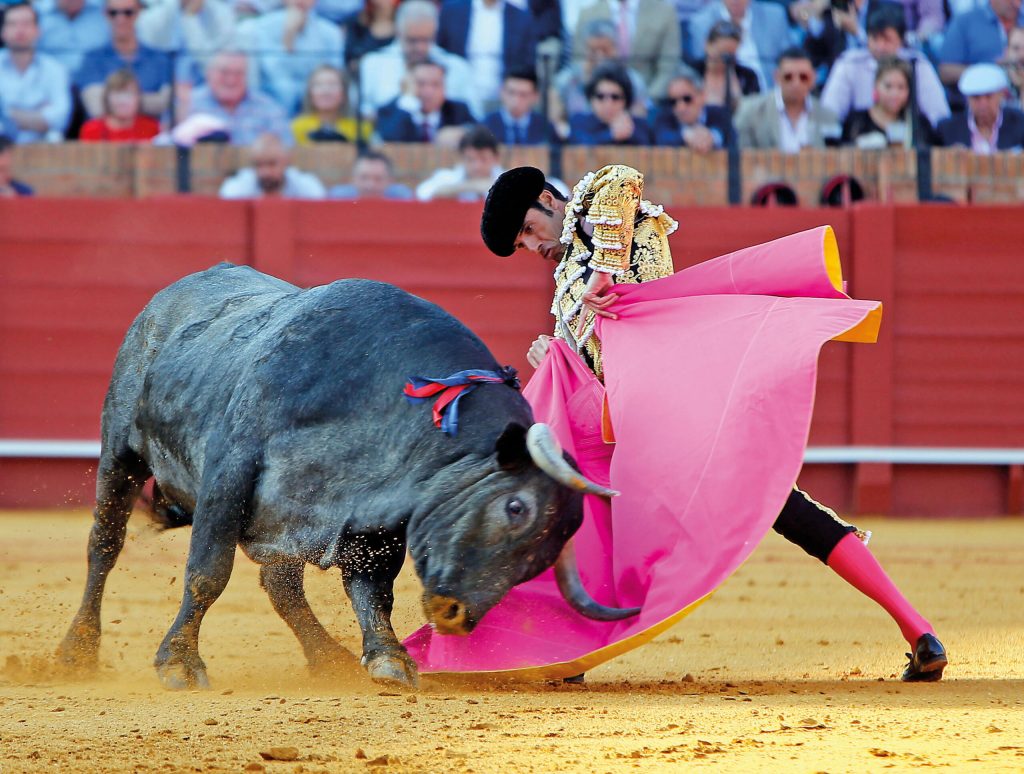 Before the Spanish bull fight starts, there is a preliminary phase in which the matador and his team work the bull with their large while carefully appraising its agility, intelligence, dangers, sight and, most importantly, its strength.

It’s very important for the matador to determine the animal’s qualities such as whether it favors one horn or the other (e.g. hooks to the left) or swings its horns up at the end of each pass.

With the green handkerchief the president confirms the returning of a bull that is considered inapt for the bullfight to the corrales (bullpen), so that it can be replaced with a spare bull.

The Spanish bull fight is about to start

As the toreros prepare themselves for the fight by practicing some cape movements (some sort of warming up), two events take place in the bullring.

An attendant enters the bullring with a board.

On it you can read:

The colors and symbol of the ganadería also appear on the bull itself in the form of a small rosette and ribbon (called divisa) pinned to his neck and a branding on its hind quarters.

The bull is about to be released

The alguacilillos (bailiffs) perform the ritual of the key: one of them requests the key to the toril or chiquero (bullpen) from the president.

The key is tossed down to the mounted alguacilillo who then passes it to the torilero (bullpen keeper). As everything in a Spanish bullfighting, all of this is purely symbolic.

The reason behind this ritual is to demonstrate that the bulls have been under the president’s supervision since the sorteo (bull lottery) that morning, and thus no tampering has been done to them.

As soon as the bullpen gate is open, the president shows his white handkerchief to signal the release of the bull.

The matador now has two options:

Greeting the bull a porta gayola 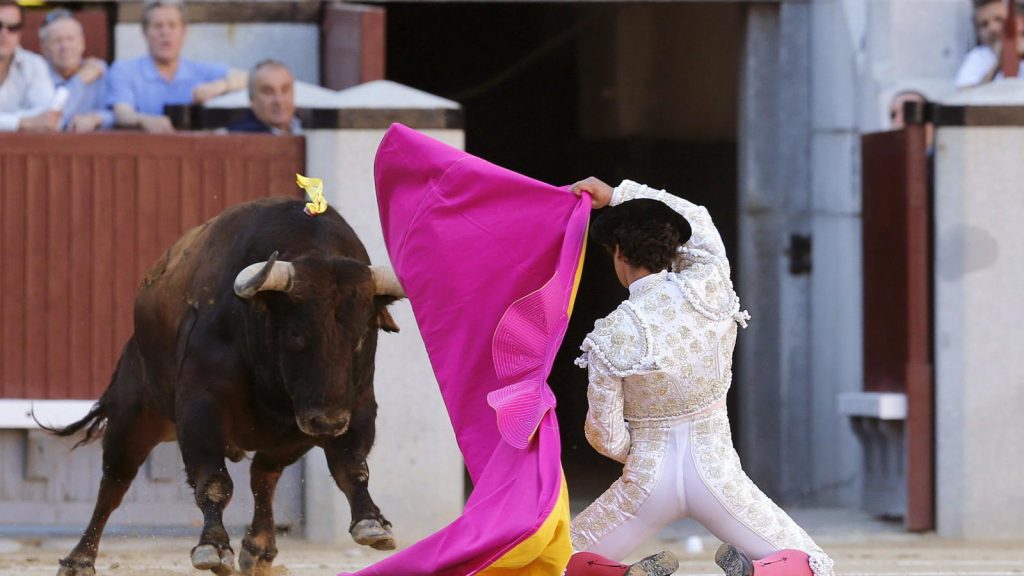 To perform this move, the matador kneels in front of the bullpen gate with the capote (a heavy pink and yellow cape) on the ground in front of him.

He holds one side of the capote with the right hand at waist height.

As the bull charges into the ring, the matador spins the capote, from right to left, over his head and attempts to lure the bull into passing past his the left-hand side of his body.

This is an extremely dangerous move as the matador is unable to move his body whilst in a kneeling position.

The bull at first sight

It’s the first time the bull is in a plaza and has human contact, so its first reaction is generally confusion.

As the bull runs towards the tablas (wooden fence), the banderilleros members of the matador‘s team immediately begin to test and assess the bull’s reactions and condition.

All toreros are carrying a capote, a large cape managed with both hands.

What is a capote?

The capote is a big and heavy cape traditionally made of a fuchsia and yellow fabric. However, some bullfighters, out of superstition, use a fuchsia and blue combination, as yellow is considered to be unlucky.

The size of the cape varies depending on the height of the bullfighter, and weighs heavily (between 4kg and 6kg).

Time to move the capote around

After a few of minutes observing the bull behave, the matador takes the lead and thrusts his capote, performing the suerte de capote (art of the cape). This strategy will allow him to notice how the bull charges, either with strength or not willing to at all. He pays attention to head movements the bull might do while charging, and thus, tries to avoid its horns.

Finally, the matador wants to know if the bull tends to go to an area of the ring. In this case, the bull has a carencia, a trend towards this area. A bull with a carencia is always a dangerous one because instead of attacking the cape, the bull might run away and gore someone unexpectedly.

The art of the cape is one of the most visual acts of Spanish bullfighting, with the matador making impressive lances (passes), and has gained in importance in the crowd’s perception over recent decades. The passes can be performed with an open or closed stance, and vary between a more technical approach to a more expressive interpretation of the basic movement.

The most important lances with the capote

In a Spanish bull fight, the suerte de capote includes an endless number of movements (lances).

Here are the two most popular ones. But apart from this lances, you can find a longer list that the bullfighters can perform during the tercio de varas. 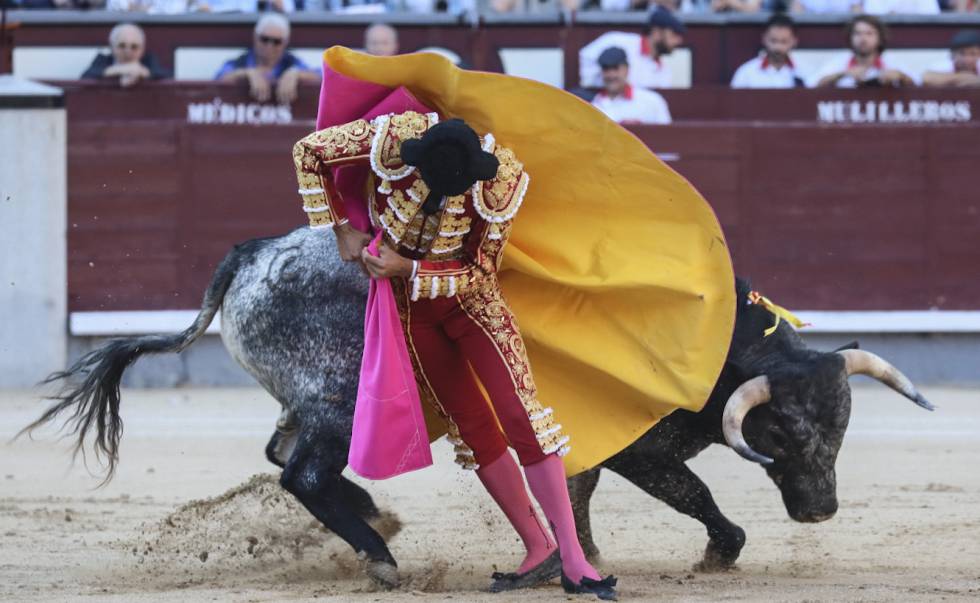 It’s the most classical move and the basis of many other cape lances.

It was created by a 18th century matador called Costillares. The Verónica is named after a painting of Saint Veronica in which she presents a cloth to the spectator in the same way that the matador presents his capote to the bull.

To execute the move the matador stands either face on, or sideways on, to the bull with the capote held high in both hands.

As the bull approaches, the matador drops one hand to waist height, allowing the base of the capote to touch the floor. He then lures the bull past him by turning his body at the waist.

Apart from being incredibly beautiful, it’s very practical because it allows the matador to keep the bull’s horns within sight. 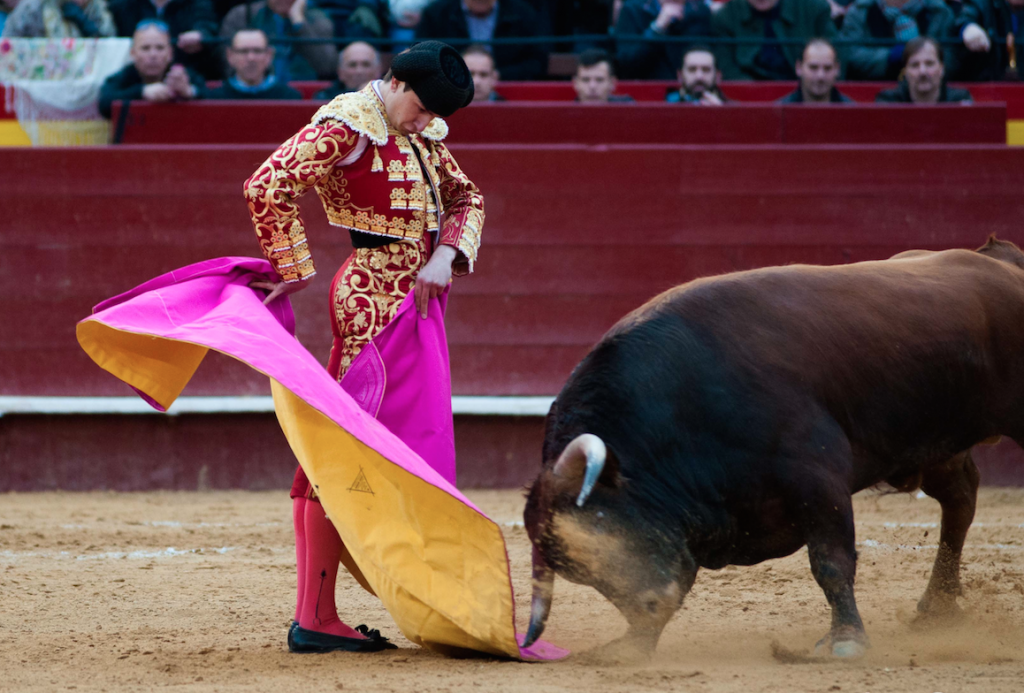 It was created by a 20th century matador called Juan Belmonte.

To execute the move the matador stands sideways on to the bull with the capote held high in both hands.

As the bull approaches, the matador brings his feet together, lowers one hand to waist height and whips the capote away from the bull by pulling it in close to his body.

The bull, unable to control its trajectory, passes by the matador who remains completely still.

Up to this stage, the experts have been eying the animal carefully and pointing out its strong points as well as its weaknesses.

They have analyzed the size of its neck, its horns, its musculature. They have observed how it runs, how it charges, how and when it lifts its head, and so on, all to test how it will perform as the encounter progresses.

So if everything goes as planned, he’ll be dead in 15 minutes.

Unless fate has something.

Sometimes a bull is reluctant to fight and major defects appear (ie. unquestionable signs of weakness), the crowd begins to get restless and protest. They whistle, shout, wave their white handkerchiefs and beg the president for a change.

If he agrees, then he tosses a green handkerchief out and the bull is tactfully withdrawn.

The bull gets yanked from the ring. To get him out, a team of steers trots out onto the arena and lure him back into the corral (bullpen).