Who Participates In A Spanish Bullfight?

Every Spanish bullfight has the same participants and you will easily recognize them by looking at how they are dressed. Each one plays a role during the corrida and all must be part of the paseíllo, a parade that takes place at the beginning of the spectacle in which the participants are presented to the crowd.

The only difference may occur if instead of a corrida a pie (on foot), you attend a corrida de rejones (on horseback). In this case, the toreros are replaced by rejoneadores.

Participants In A Spanish Bullfight

Matadores. The matador, or commonly designated torero in Spain, is the main performer in a bullfight. He is responsible of leading the bull’s charges and finally killing it in an aesthetic way. A good matador is considered both an athlete and an artist showing great agility, grace, and coordination.

If the matador was a particularly skillful banderillero before becoming a matador, he will place the banderillas himself.

A matador goes through several education stages, and most of it relies on practice. First he has to become novillero, fighting novillos or young bulls. Once he is experienced enough, he performs a special corrida called la toma de alternativa, in which he graduates and becomes a matador.

Their traje de luces are always embroidered in gold.

Banderilleros (or Peones). They are the toreros that plant banderillas in the top of the bull’s shoulder during the second stage, the tercio de banderillas. They must do so as close to the top as possible and in an elegant manner. The audience will judge their form, skills and bravery.

Apart from this important task, those not holding the banderillas are also in charge of the lidia, moving and positioning the bull where the banderillero will be more comfortable to face it.

They can also help the matador positioning the bull during the tercio de varas, to better face the picador. And if the matador does not kill the bull after the tercio de muerte, one of them has to kill it using the puntilla, which is a small dagger.

Their traje de luces are always embroidered in silver or black.

Picadores. They are probably the most important allies of the matador. Using the pica, the picador tests the bull’s strength and provides clues to the matador about the side the bull is favoring. They perform during the first stage of the fight, the tercio de varas.

After provoking it, the bull will charge against the picador and its horse. Right before the bull’s horns contact the horse’s peto, the picador lances the bull at the back of its neck. This is performed to lower its head and to prevent a cogida during the faena. The wound and consequent loss of blood gradually weakens the bull and prepares it for the next tercio.

Monosabios. They are responsible for helping the picador to ride the horse, and aid him if he happens to fall down because of a bull’s charge. The origin of this peculiar name comes from a circus spectacle that took place in the 1850s in Madrid in which a group of trained monkeys performed a series of skilled activities. The monkeys wore red shirts and the crowd started to compare them with the people at the bullring that helped the picadores. They wear a red shirt and dark blue trousers.

Mulilleros. They manage the mules that bring the dead bulls out of the arena. They wear a white shirt and dark blue trousers.

Areneros. They are in charge of cleaning and keeping the sand in good condition. They wear a green shirt and dark blue trousers.

Rejoneadores. The rejoneador is the main performer at a corrida de rejones. He fights the bull on horseback and his objective is to demonstrate to the crowd his skill and nerve controlling both the bull and the horse. Actually, the rejoneador uses several horses depending on the stage of the corrida and how tired they are. Don’t confuse them with picadores.

The Paseíllo Or Opening Parade

In a Spanish bullfight the paseíllo is a parade of all the participants in a corrida or bullfight. It’s the public presentation of the matadores and their team to the audience.

The paseíllo follows the same order before the first bullfight starts. 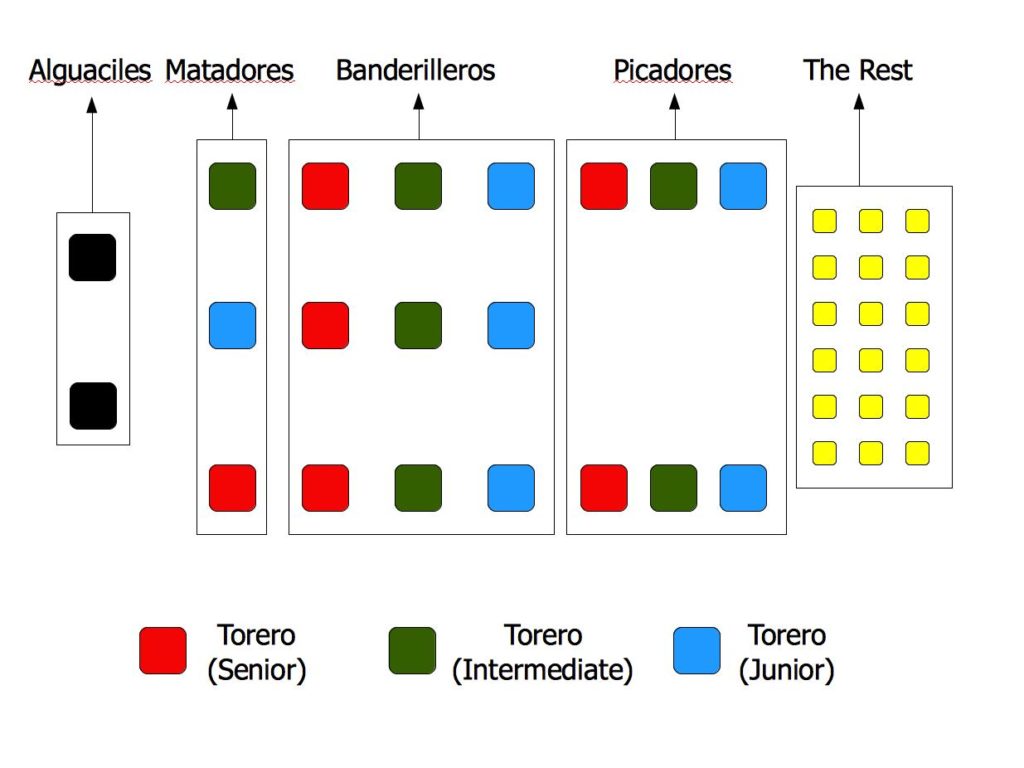 All must salute the President hosting the fight. The President plays a very important role because he’s in charge of the bullfight timings. He’s also the ultimate responsible when it comes to award trophies to the matador.