Essential guide to flamenco in Spain 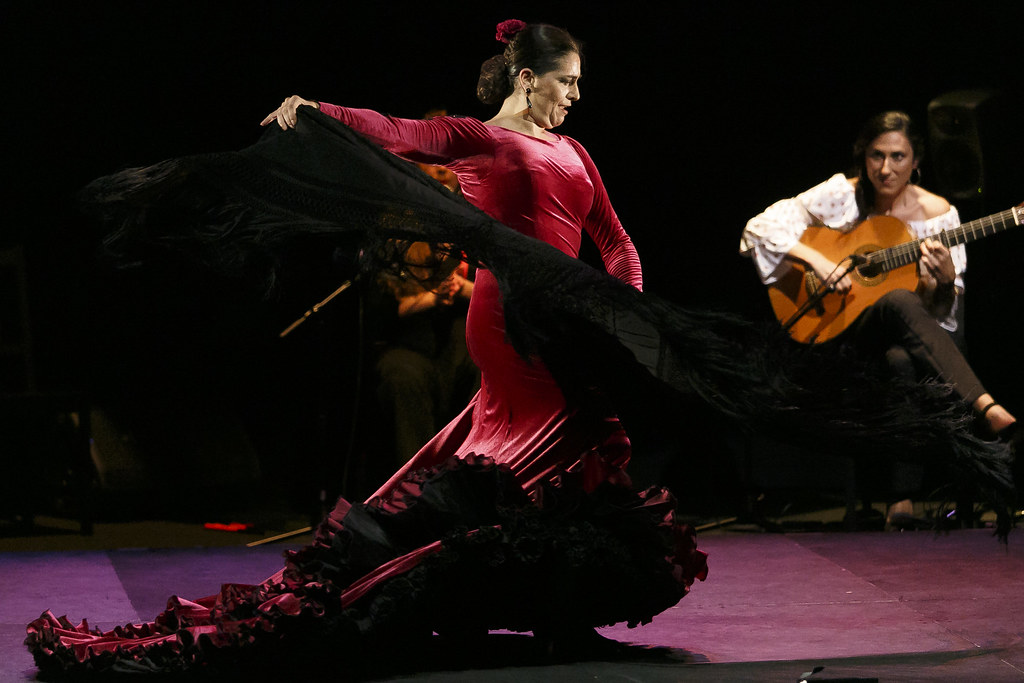 Flamenco in Spain is almost sacred and, still today, the most famous Spanish art form. It’s usually very passionate, loud and sensual. From generation to generation, the legacy of flamenco is gotten across, whether it is to conserve it or for it to evolve.

Andalucía, the southern part of Spain which is flamenco’s home, has a strong musical tradition documented from ancient times and flamenco certainly takes part into that heritage. Throughout the centuries Andalucía absorbed people of different cultures and backgrounds – including Romans, Jews and Moors. The melting pot is phenomenal.

Regarding flamenco, the arrival of nomadic gypsies in the 15th century marks the introduction of new rhythms and musical instruments. And they decided to settle in the south of Spain. At the same time, both Jews and Moors were expelled from the country.

The roots of what we know today as flamenco were there…

Dancing is the most popular of flamenco’s expression forms. You surely have seen a video or a picture of a woman wearing a spectacular dress while dancing passionately.

But flamenco is more than that.

Along with singing and guitar playing, flamenco is a state of mind. It’s a powerful art that usually conveys deep emotions such as pain and sadness.

This is what differentiates flamenco and what makes it a global phenomenon – the emotion. When you see a performance, you can feel the strong bonds between the dancer, the singer, and the guitarist. The performers work as a seamless unit, often exchanging glances and interacting on stage, passing words of encouragement and praise that connect the performers and the audience.

Actually, there is also a dialogue between the artists and the audience. And the best way to experience this connection is to go to a live flamenco show. The atmosphere that is created is hard to describe.

Read everything about flamenco »

Where to see flamenco in Spain?

Did you know that Spain is the cradle of flamenco? Many famous artists among cantaores, bailaores and guitarists are originally from here.

On top of it, some of the most important flamenco festivals and events (e.g. the Bienal de Flamenco) take place in Spain.

Combine an authentic flamenco dancing show with the best of the city’s nightlife. From a real tablao, to some small theaters and venues, or even a flamenco bar, the possibilities are endless!

The best flamenco show in Spain

You’ve decided to explore the world-class range of flamenco in Spain and go to a show.

You googled the best shows in Spain and… Ah! You end up with dozens of results. Who would have thought?

I know, I know, picking the best flamenco show in Spain for you can be an overwhelming task.

But don’t worry, I’ve done the hard work for you and selected the best flamenco Spain has to offer!

How to enjoy flamenco dancing in Spain

How to experience the best flamenco dancing? Spain is considered the cradle of this art. It is, without a doubt, one of the best cities in Spain to enjoy an authentic flamenco show.

But with so many options to choose from throughout the city finding a genuine, high-quality show can sometimes be a little tricky.

To help you stay away from the tourist traps, here are some insider information of what you should look for when choosing the flamenco show you plan to see.

How to enjoy flamenco dancing in Spain »

One of the best ways to connect with the dancing culture of Spain is by taking flamenco dance classes. Spain is famous for being the origin of flamenco, and flamenco dancing courses are becoming more and more popular. Stop being part of the audience, cross the line and get into this magic world.

The flamenco history started some 300 years ago. It’s said that it has roots from all the medieval cultures that inhabited Spain. Thus, it’s a dance that intermingles features from the local musical culture and many others thanks to the influences travellers brought back to Spain from the colonies.

However, it has always been linked to the Spanish gypsy community. They have been for decades the major spreading actors of this musical style within Spain, but also abroad. And they still are, the most famous virtuosos are gypsies.

Did you know that in the 1930s the most famous dance in Spain was on the verge of disappearance? Pure singing was rejected, the taste for the authentic was lost, and only superficial performances were appreciated. Fortunately, from the 1950s on it became so popular that today it is one of the symbols of the Spanish culture.

More details on the flamenco history »

Flamenco in Spain was initially performed at family parties or among peasants, so it has naturally evolved in a myriad of styles. The list is so long only experts are capable of recognizing them all!

Every style is called palo and represents a different traditional flamenco variety. To give you an idea of how wide flamenco can be, there are more than 50 palos which, in turn, can have many variations…

There are confronted opinions on what is the most important element of flamenco.

While some experts claim that the songs, and most particularly the lyrics, are essential, others affirm that without the introduction of the guitar, flamenco would be just too arid and harsh.

Flamenco has 3 main forms of expression:

What is flamenco about? Do you know the difference between the cante grande and the cante intermedio?

The myriad of terms used to describe the music, the rhythm and the feelings related to flamenco is so wide that you should at least know a bit about the basics.

A glossary helps you to understand flamenco dancing and the importance it has in Spain. Although not exhaustive, it introduces you to some basic concepts providing either a short explanation or a translation. A must read if you plan to attend a show and know more about the subject!