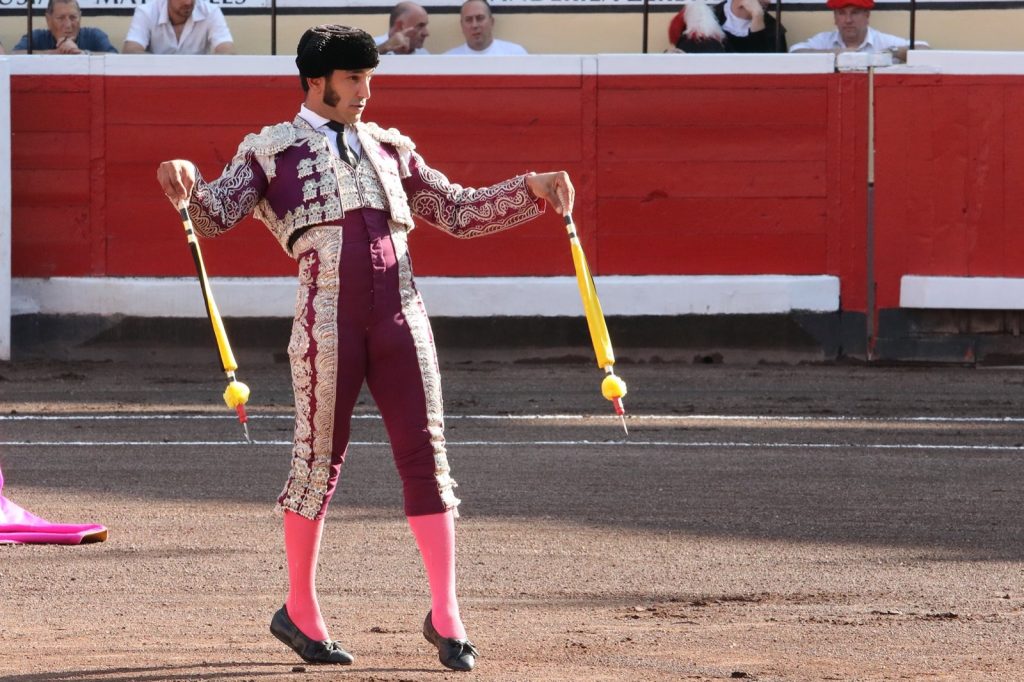 The second stage of any Spain bullfight is the tercio de banderillas, during which banderillas (barbed darts decorated with colorful ribbons) are placed in the bull’s morrillo (a complex of muscles over the shoulder and neck).

The banderillero, carrying a banderilla in each hand, runs towards the charging bull at an angle and places the banderillas in its neck. These are not supposed to weaken the bull but rather to provoke the bull to charge face on.

What is the tercio de banderillas?

As the picadores leave the arena, the matador will try to perform some more intricate movements with the capote, just as you saw him do so during the tercio de varas.

Normally, each matador’s team of banderilleros performs this tercio, with the matador observing the proceedings from nearby in order to further study the bull.

Three banderilleros are present in the arena. Two of them perform the actual planting of the barbed darts, whilst the third one positions the bull using his capote.

And the bull must have a minimum of four banderillas in its body before the matador can ask for this stage to end.

Eventually, if the matador is particularly skilled, he might plant the barbed darts. But it doesn’t happen often.

Besides being a showcase of skill and courage, the banderillas serve another purpose.

The banderilleros‘ attacks are less intense than the picadores‘ earlier on so it can recover some power. If it’s a real toro bravo (or fighting bull, a different species than regular cattle) it will charge with more vigor and rage.

A banderilla is a 75-centimeter brightly colored barbed dart. Its name, “small flag” in Spanish, refers to its decoration.

It’s covered in paper and has a 5-centimeter metal barb, similar to a hook. It also has a cord joining the pole to the metal barb.

That way, once the banderilla is in place, the bull’s movements unlink both pieces and the pole dangles from the cord at the side of the bull. This ensures that the matador has clean entry with the sword in the third act, the tercio de muerte.

As I have explained before, the purpose of a banderilla is to re-engage the bull after its demanding contact with the horse.

Why becoming a banderillero?

You my be wondering why would someone choose to be a banderillero instead of a matador? After all, the matador is the main character of the fight, and the one who will earn all the glory if he succeeds.

They all have been to a bullfighting school, but for some reason (e.g. lack of talent or charisma), they were unable to get what it takes to be a professional matador.

But don’t take wrong, they aren’t bad or second-class professionals. Quite the contrary.

The task of a banderillero is extremely difficult, and it requires a lot of skill and courage to do what he actually does.

As I mentioned before, there are very few matadores who are capable of placing banderillas. And those who are, are highly respected by the audience.

How a banderillero performs in a Spain bullfight

As the picadores leave the ring, the banderilleros prepare themselves to face the bull.

However, they don’t have a cape to distract the bull but banderillas.

During this stage of a Spain bullfight, each banderillero tries to stick a pair of banderillas in the bull’s shoulders.

He carries one in each hand, and holds them in the up in the air as if they were horns while directing them at the bull.

While the bull chases him, the banderillero often chooses to jump the barrier and escape.

Nevertheless, the tercio de banderillas is a part of the Spain bullfight in which serious accidents often happen.

Some of the banderillero‘s tactics in a Spain bullfight

There are several tactics that the banderillero can use to provoke the bull’s charge and to approach it.

The banderillero stands in front of the bull (towards the barrier or the center of the ring), provokes the charging of the bull and waits for it with feet together. An instant before they meet, he moves his leg and/or lean the body towards the side where he wants the bull to pass by and just when he lowers its head, the banderillero recovers his initial position and places the barbed darts.

Both meet in a very small space. The banderillero faces the bull and places the barbed darts face to face.

De poder a poder (From strength to strength)

Tactic in which the banderillero doesn’t grant himself any advantage, he gives them all to the bull, instead. By letting the bull start running slightly before him, planting the barbed darts requires great courage and a lot of agility.

De dentro a afuera (Inside out)

Desde la barrera (From the barrier)

The banderillero is placed with the barrier behind him. From there he provokes the charging of the bull. It’s an extremely dangerous tactic because the banderillero has less space to run from the bull in case something goes wrong.

It’s performed with one hand by placing the two barbed darts on the bull with a gesture similar to the act of playing the violin, hence the name. Once the banderillero provokes the bull, he raises the right hand with both banderillas, over the left shoulder.