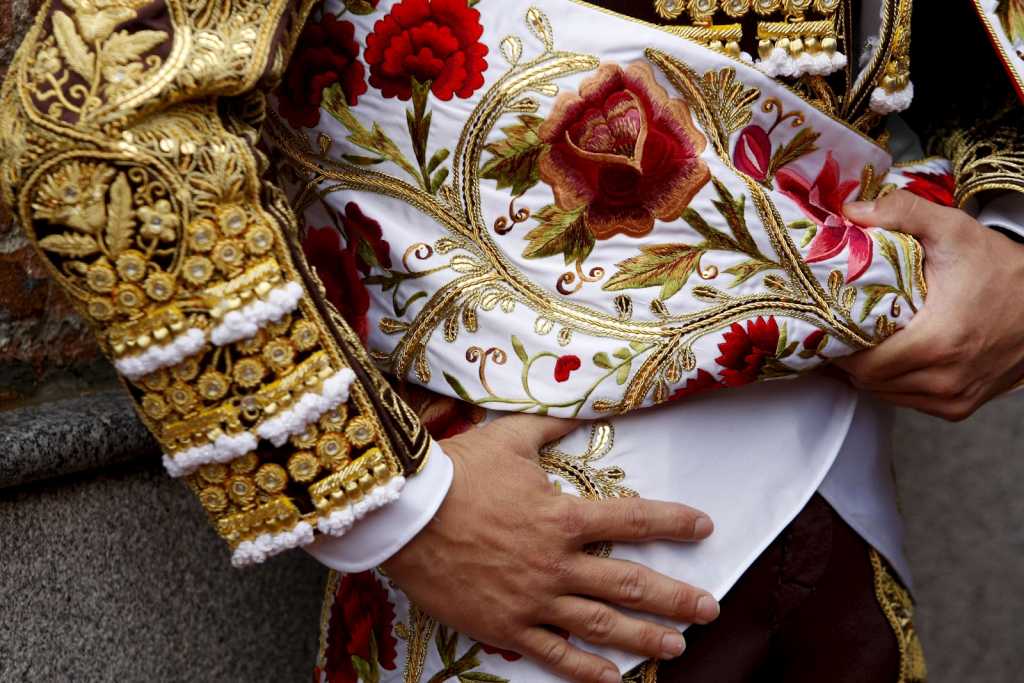 During the third Spain bullfighting stage, the tercio de muerte, the matador faces an incredibly difficult challenge and the most dangerous moment of the corrida. He must confront the fighting bull and kill it elegantly.

The muleta and the moment of truth

Once the tercio de banderillas ends, the matador enters the arena alone. The final third is the longest and most iconic phase of the bullfight. It’s the matador‘s one-on-one encounter with the bull.

The matador enters the scene…

He carries with him a one-handed red cape called muleta. Smaller than the capote, the muleta is made of a red, more lightweight fabric. The fabric is mounted on a wooden stick (palillo or estaquillador) giving the muleta its shape and some rigidity.

The matador also carries an imitation sword, made of either wood or aluminum, which is used to extend the fabric. This combination increases the size of the cape when giving passes.

The fake sword will later be exchanged for a real killing one made of tempered steel. Both swords are called estoque.

And he only has ten minutes to conquer the audience

In Spain bullfighting stages are signaled with the sound of a bugle.

As soon as the bugle sounds to signal the beginning of the tercio de muerte, the matador has ten minutes to carry out his performance.

If he doesn’t kill the bull within this time frame, a warning will sound granting him a further three minutes to finish the performance before a second time warning. He has two more minutes, but after the third warning, the matador must withdraw and the bull is returned to the pens for slaughter.

Hearing the third time warning is a rare occurrence and is considered a complete failure for a matador, because he has lost his personal fight against the bull. The bull has escaped its fate and has left the ring alive.

The third Spain bullfighting stage may begin with the brindis

The matador takes a position below the president’s box and, holding his montera with his right hand, folded muleta and sword in the left, formally requests permission to brindar (dedicate) the bull to some person or friend, to whom the montera is tossed.

Alternatively, he can dedicate the death of his first bull to the president. This was the tradition followed up until 1962, although nowadays the matador chooses who to dedicate the bull’s death to.

A bullfighter may also dedicate the kill to the general public, signified by doffing the montera to the crowd, turning full circle, and then tossing it over the shoulder to the ground. Superstitious bullfighters take special note whether the montera lands up or down, for a montera that lands upside down could mean that it will soon be filled with the bullfighter’s blood.

Time for the suerte de muleta or faena

The faena (job) or performance with the muleta is is the main part of the matador’s artistic display. Therefore, the matador exerts himself to display an aesthetically and technically coherent performance that culminates in the momento de la verdad (moment of truth), the killing of the bull.

Why is the faena the climax of the fight?

With the faena, the matador proves to the audience and himself 3 virtues:

What does the matador do during the faena?

The faena often begins with the matador passing the bull in parallel lines across his body. The matador places his feet together and straight, and only moves as the bull turns around to repeat its charge, slowly moving the animal towards the center of the ring.

During the third Spain bullfighting stage, the matador performs a sequence or series of pases called tandas. A regular tanda is composed by 5-6 pases, each one building in intensity, and then a final touch, or remate, the most common one being the pase de pecho.

Depending on the success of his performance and the bull’s remaining energy, the matador ends his faena sooner or later.

At this point, he makes a final tanda of shorter passes, positioning himself right in front of the animal and displaying total dominance of the bull. He then leads the bull towards the wooden fence to correctly position the bull and stab it to death.

Some of the matador passes during the faena

The passes vary from one matador to another in the posture adopted, speed, fluidity of movement, rhythm, angle of the cape, how they are linked to each other, and other factors. His style and the bull’s collaboration are crucial to evoke an emotive reaction in the crowd, and to make them connect with his performance.

The passes are divided into four categories:

These passes are also divided into two categories:

Naturales are the standard passes of the faena. The bull follows the muleta as the matador places it in front of it and then leads it around his body.

Passes are either performed with the muleta in the right hand (derechazos) or the left hand (naturales) since the muleta is not extended by the sword and displays its natural shape.

With the cambiados (exchanges) the matador gives the bull the exit from the opposite side to the hand with which he holds the muleta.

Ayudados (supported) are passes in which the matador uses both hands. They are always performed sideways on to the bull and the bullfighter may used the estoque to extend the muleta.

During the third Spain bullfighting stage, some matadores, before killing the bull, may demonstrate their complete mastery of the animal by executing an adorno, performing an ornamentation – a superfluous flourish.

These theatrics vary, and, while dangerous and dramatic, they are considered by some matadores and purists to be an offense to the dignity of their adversary.

In Spain bullfighting is a spectacle full of emotions. You will notice immediately if the audience is particularly thrilled and impressed by the matador‘s pases and his ability to lead the fight, because people will shout “ole!” and applaud at the end of each tanda.

In Spain bullfighting finishes with the estocada

When the matador feels that the bull is ready, he walks to the tablas to exchange his aluminum sword for the killing one. He only has one thing in mind to kill the bull in the most elegant and effective manner.

This moment is generally called momento de la verdad (moment of truth) or the suerte suprema.

What is the estocada

The estocada is the act of stabbing the bull to death. It’s the most difficult task the matador faces in a corrida for 2 reasons:

There are two possible ways to execute this maneuver.

The 5 most common estocada techniques

To do so the matador faces the animal, directly between the horns and, presenting the muleta to the bull with his left hand, he encourages the bull to lower its head, and to focus on the muleta.

In a combined movement, often accompanied by a loud vocal outcry, the matador then moves the muleta to invite the bull to attack, while he simultaneously takes a step towards the bull. As bull and matador come together, he places the sword high up between the bull’s shoulders.

When the matador waits for the bull to come to him.

It can be translated as simultaneously. In this case the matador and the bull move toward each other at the same time.

When the matador and the bull meet as the man is about to start walking.

When the matador and the bull meet as the bull is about to start charging.

What happens after the estocada?

In Spain bullfighting often requires silence. Therefore, remain quiet, as the rest of the crowd will, while the matador executes the estocada.

The sword positioning is crucial.

The matador must be skilled enough to sever the bull’s aorta with the estoque. The estoque must be placed right into the cruz (cross) – the space between the shoulder blades and enter at the right angle.

The matador kills the bull on his first attempt

If successful, the bull instantly collapses with the crowd rising to their feet applauding, showing their appreciation of the matador’s performance.

After the sword is thrust and the bull is down, another torero (the puntillero) will ensure the animal’s death by a jab of a puntilla (small knife) behind the bull’s head.

Meanwhile, the acclaimed matador returns to the person honored by the brindis. He is now considered a hero, and awarded consequently.

Unfortunately, if the matador fails, the crowd will protest fiercely and even if the whole faena was perfect, this finale ruined it completely. He may decide to try it again but the audience will barely pay attention: it’s a one-chance game.

The estocada can be defective because of its

If the bull is still alive, and seems physically incapable of charging for another estocada, the matador must perform the descabello (act of cutting the bull’s spinal cord) in order to spare the animal any further pain. To do so he uses a sword with a small cross bar towards the end of a short, thick blade.

It’s the end of the third Spain bullfighting stage.

Once the bull is dead, its body is dragged out of the arena by the mules you saw during the paseíllo. If the audience is impressed by the performance of the bull, people will applaud as it abandons the ring.