How to buy your bullfight tickets 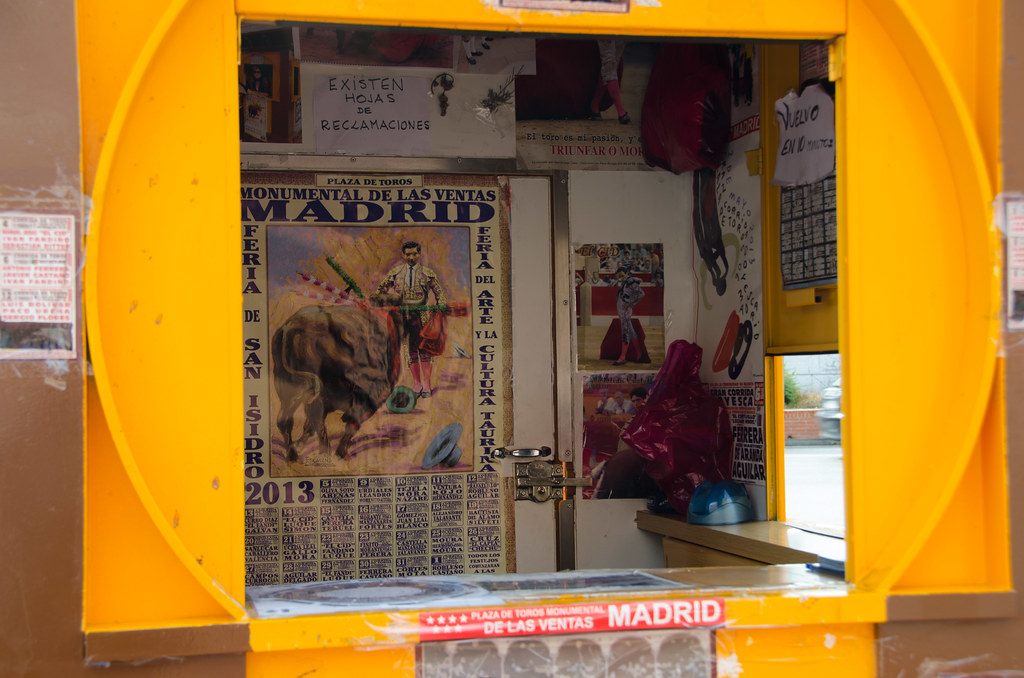 Trying to get bullfight tickets can be a challenging task. Depending on the bullfight you want to attend, you risk waiting in line for hours, not being able to communicate with the ticket office staff and explain them where you want to seat or ending up with not very good tickets with poor visibility…

That’s why the best way to ensure you get good seats at a bullfighting is to order them online before you leave home.

Online purchases allow you to:

And it’s just a couple of clicks away!

What is the best option to get bullfight tickets?

Get your tickets online

The best option is to get your tickets online.

The purchasing process is easy and you can ask for the tickets to be delivered at home. No waiting lines, risk of missing the fight or last minute negotiations with third parties.

You can also get them at the box office

However, if you are more like a last minute person, you can always go the bullring and purchase your tickets at the office.

While it’s true that you won’t pay any commission, you risk not having tickets at all. For example in Madrid, this is particularly true during the most popular festivals (Feria de San Isidro, Feria de la Comunidad and Feria de Otoño), while in Seville you’ll have a hard time finding tickets during the Feria de Abril.

In addition to this, you’ll have to face the language barrier. Most staff at the bullring doesn’t speak English so you’ll need to have a very good idea of:

If you don’t have a clue, you risk ending with not-so-good bullfight tickets…

Alternatively, they may be available through a reseller who will ask for a much higher price. These ticket scalpers usually operate at the bullring surroundings and look for last minute clients.

Don’t turn on them unless you really want to attend this fight, as prices can vary enormously.

Again, your preferred option should always be purchasing your tickets online as soon as you know the dates in which you will be travelling.

When are bullfight tickets available?

Tickets are released as soon as the bullfights are scheduled and the official dates are published. The sooner you buy your bullfight tickets, the greater your chance of choosing the best seats.

Actually, depending on the event, bullfight tickets can be sold in just a few hours. This is why you should buy your tickets as soon as possible.

How much is a ticket to a bullfight?

First of all, the importance of the bullring, the type of festival and the bullfighters that participate are decisive elements that will determine the price of the ticket.

For instance, a ticket to attend a fight at Las Ventas is more expensive than at La Maestranza in Seville. To give you another example, it will cost you more to see the biggest names in the industry than a beginner novillero.

And as you have probably guessed, the better the seat, the more expensive it is.

Seats in the bullring are priced based on proximity to the arena and whether they’re in the sun or the shade.

Therefore, prices for corridas can go from less than 20 euros to several hundred euros depending on where and when you buy it.

What seats are best?

The best seats are situated in either

That’s because those tendidos are located on either side of the president’s box.

Depending on how close to the arena they are, the best rows in these sections are:

Please note that depending on its size, not all bullrings have delantera and/or tendido bajo.

Therefore, the closer to the arena, the better the seat (and the more expensive).

These are the seats that I recommend you, in order of preference.

Get your bullfight tickets now » 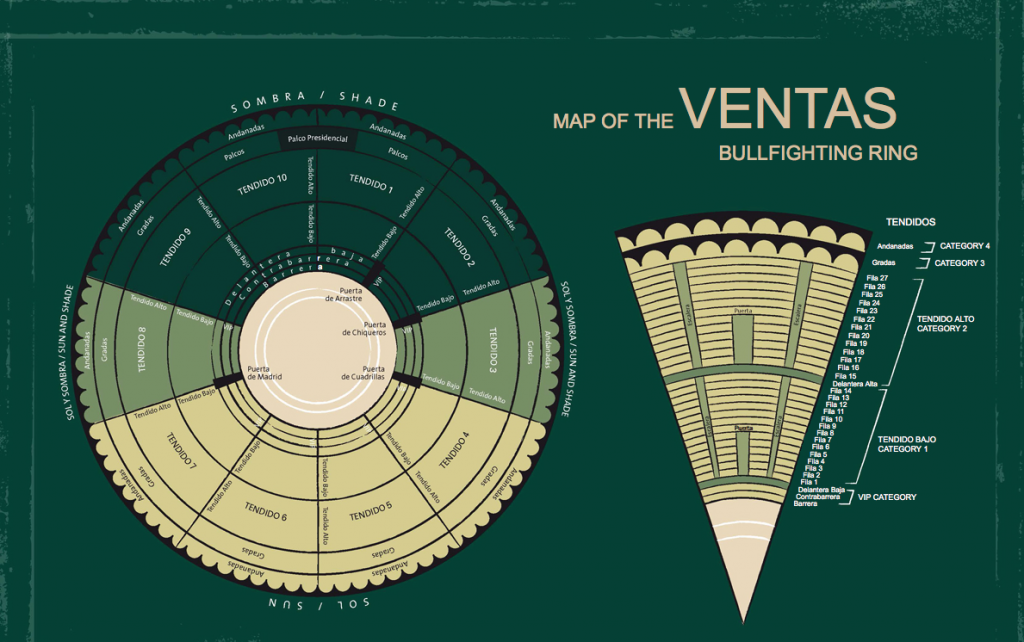 All bullrings are round.

You won’t find a squared, oval or any other shape bullring. They used to be squared in the 1800s but it soon became evident that a bullring with corners was much more dangerous for the matador than a circular one.

The bullrings are oriented, according to an axis whose head is the presidential box, towards the East. In this way, in the early afternoon the half corresponding to the box is in the shade and the opposite half in the sun.

Hence, every bullring is divided into 3 different areas:

Each of these areas is divided into several sections or tendidos. As you will see in the seating chart available below, each tendido is a “slice” of the bullring.

Tendidos are the different sectors that the bullring is divided in, as if it were the portions of a pie, and can be numbered from 1 to 10.

As I explained above, they can be shade, sun, or sun and shade; according to the light of the sun they get during the bullfight.

If you are interested in attending a bullfight in

How to get your bullfight tickets online easily

The process to purchase your bullfight tickets online is extremely simple. All you have to do is follow this step-by-step guide and you will be done in a few minutes.

1. First, select the bullfight you want to go to according to your preferred dates.

2. After what you have read in the previous sections regarding the seats specifications, have a look at the seating chart and select your area (sombra, sol y sombra or sol).

3. Select your seats. Remember that the closer to the arena, the better you see the action but also the more expensive the price is.

4. Fill all your details. Here, you can also register so that all your personal information is saved for future purchases.

5. Select your payment method and fill your details.

As soon as you receive the confirmation email, you’re done!