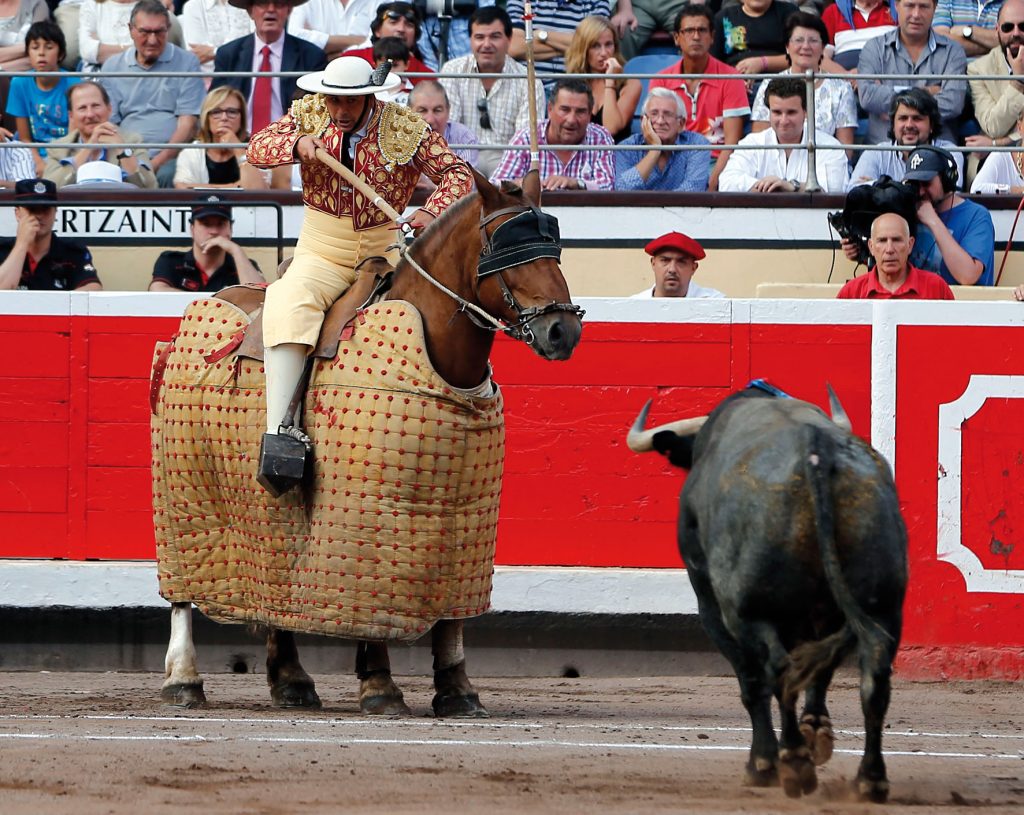 In an authentic Spanish bullfighting the tercio de varas starts right after the bull enters the ring. Its purpose is to weaken the bull’s powerful neck muscles.

This strategy ensures that the bull carries its head low so that:

The picadores enter the scene

In Spanish bullfighting the tercio de varas starts when the president uses his white handkerchief to signal the entry of the picadores.

The music band blows a bugle and the tercio de varas starts!

Then, the president indicates for the two picadores to enter the plaza, riding their horses. Each of them is armed with a vara or lance. Because of their importance, they are the only toreros apart from the matadores who are allowed to wear gold embroidery on their jackets.

The picadores position themselves on opposite sides of the arena:

The picador de reserva only takes part in the bullfight if his colleague is dismounted and hurt.

He also reacts if the matador is unable to control the bull’s charging direction and he’s forced to defend himself.

Time for the bull to charge…

At this point of the Spanish bullfighting, the matador ideally positions the bull close to the center of the ring, facing the picador who is further away from the gate where they entered the ring. Depending on his ability to do so he will get the crowd’s approval and respect.

As the bull is encouraged by means of movement and voice to attack the horse, the picadores‘ mission is to stab the bull’s neck. A truly brave bull needs very little encouragement to charge.

Fortunately, horses are completely protected by a padding armor and blindfolded to avoid eye contact with the bull. This allows the picador to control the horse without it panicking as the bull approaches.

And for the picador to defend himself

While the bull is charging into the horse, the picador attempts to withstand the charge by placing his vara (spear) into the morrillo (the bull’s large shoulder muscle).

The metal part of the spear should enter once and then held in place without being removed or jabbed.

Not all picadores follow this rule. If the picador doesn’t, you’ll hear boos from the crowd because they consider that he’s overly chastising the bull.

In this case, a bit of play acting starts and the matador seems to call off the picador. The matador is the picador‘s boss, so if he orders him to stop, he should stop.

However, in Spanish bullfighting the matador actually benefits from the picador behavior.

The reason behind this fight between the picador and the bull is to weaken its neck muscles. If the picador succeeds, the bull will lower his head and horns during the rest of the fight, becoming less dangerous.

Moreover, a bull with a weaker neck makes it less dangerous when he will enter for the kill later on.

At no point should the picador allow his horse to go across the outer circle of the ring (ie. the white or red ring drawn into the sand). The picador has to keep his ground and remain at all times outside of the center of the arena.

The matador commands the picador how many times he has to stab the bull, but it’s generally no more than three.

Once the picador has drawn blood, he will try to disengage from the bull by moving his horse in a leftwards circular movement.

In between the different puyazos (jabs) the matador lures the bull back towards the center of the arena in order to perform further capote passes. With this passes the matador is able to measure the effect of the previous stab, to further display his art, or a combination of the two.

Ornamental moves with the capote

As I just explained, their purpose in Spanish bullfighting is to distract the bull away from the horse. That way the matador has the chance to demonstrate his talent and style.

You may have already read about the Verónica and the Media Verónica, but here are some more. 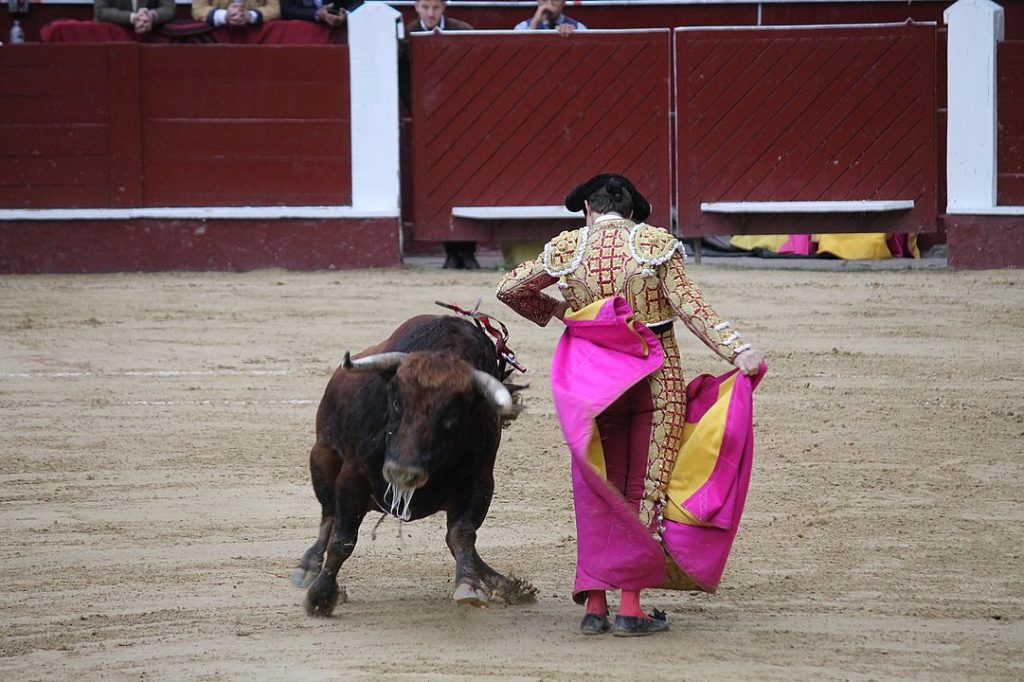 The move was originally created by a comic bullfighter called Rafael Dutrús Zamora “Llapisera” (1892-1960), but was later on adopted by matador Manuel Jiménez Moreno “Chicuelo” (1902-1967).

The matador stands sideways on to the bull offering the capote with both hands. As the bull charges, the matador turns on the spot away from the bull’s direction making the capote to wrap around his waist. 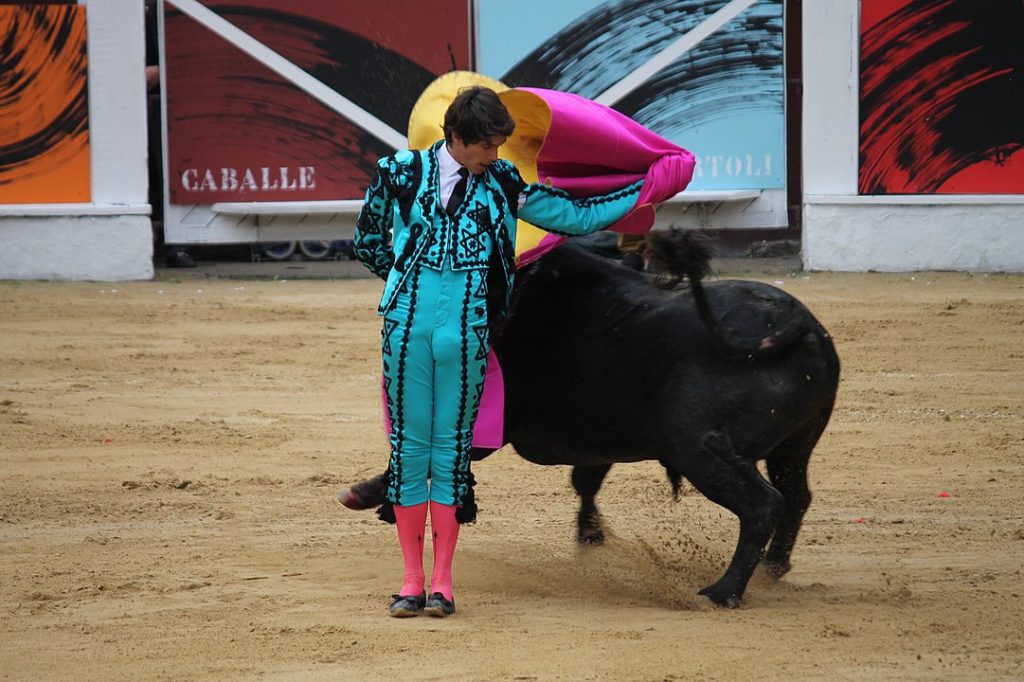 It was invented in Mexico by Saturnino Frutos, a Spanish banderillero known as “Ojitos”.

However, its name is related to the Mexican bullfighter Rodolfo Gaona (1888-1975) known as “El Califa de León”. He presented it in Spain for the first time and made it popular.

The capote is held from behind with both hands, leaving most of the cape on the same side, which is generally the right side. As the bull passes, the bullfighter makes half a turn towards the opposite side of the attack, lifting the capote and sliding it over the bull’s back. 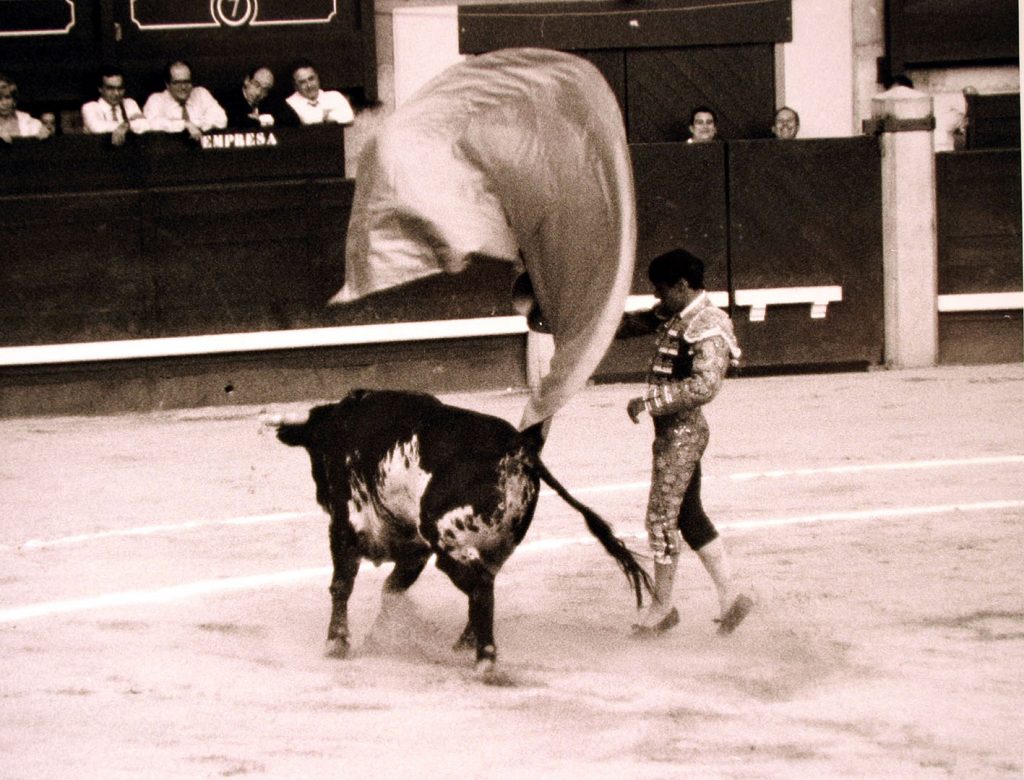 It’s an ornament that serves to finish off the series with the capote, the Serpentina begins with a Larga Natural, as if a Verónica were being executed with one hand, and once the bull’s charge end, the matador rotates the capote vertically. Once the circumference has been completed, he rotates the capote horizontally around his waist, like a roll, but changing the hand that picks up the capote from the back. 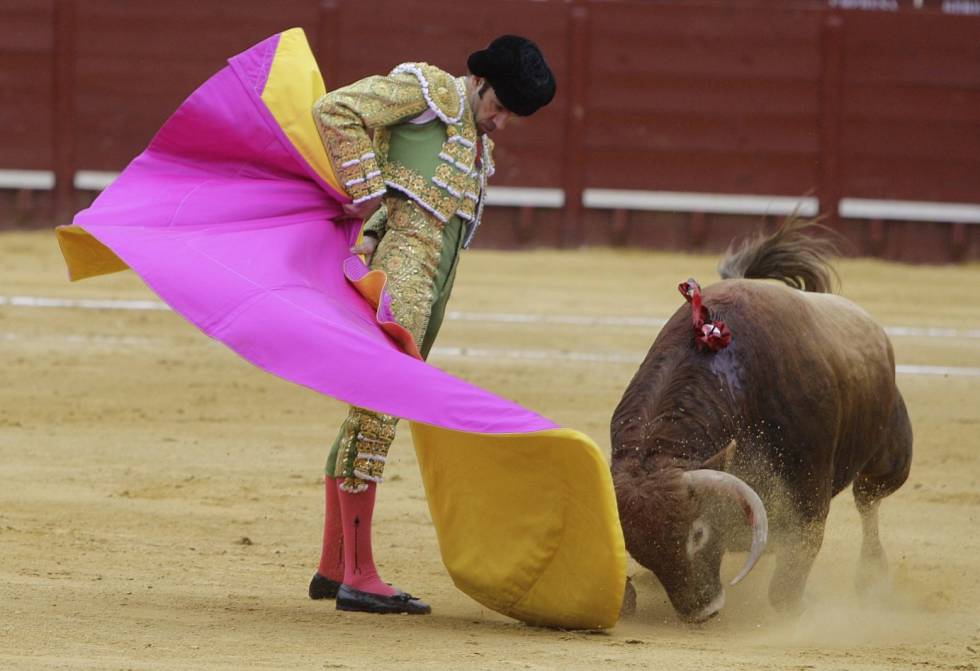 An elegant move executed with the capote in front with one hand, as the bullfighter move away the bull from his body by turning the capote over his head. He finishes off by passing the capote from one hand to another, as if it was a moving circle, while bullfighter turns on himself.

The matador puts his capote very tight to his body, below the waist, as if he was putting on an apron.

When executing the Verónica, the matador extends his capote and arms away from his body to guide the bull’s movement as long as possible.

When executing the Delantal, it’s the opposite. The bullfighter stands by showing off his chest and with his feet together.

When the bull puts his face into the capote, the bullfighter reverses and removes his hand. Then, he removes the capote from the bull’s face and puts his arms inwards. Simultaneously, he moves his body forward if the bull is too far away, thus achieving a greater reunion. 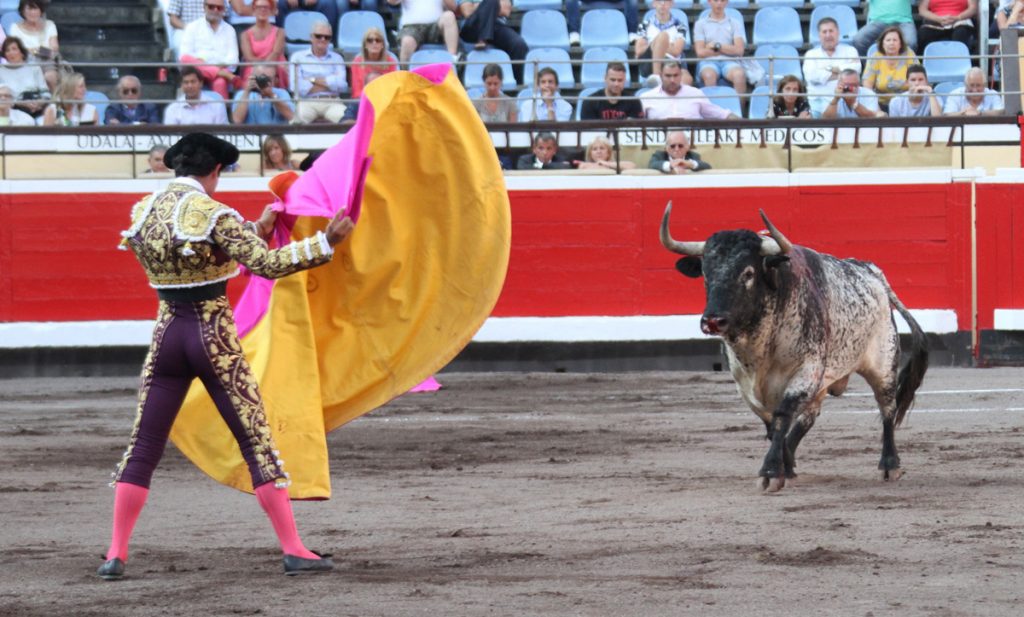 The creator of this spectacular quite is the Mexican bullfighter Miguel Ángel Martínez Hernández “El Zapopan” (1953-) hence the name of Zapopina.

To perform the Zapopina, the bullfighter takes only half of the capote and, when the bull starts to charge, he performs a kind of very showy Abaniqueo that is finished like the Chicuelina, to later turn and repeat the move. The final touch is usually a Media Verónica, with the capote grabbed in regular fashion.

Created by the bullfighter Francisco Antonio Ebassún Martínez “Martincho” (1708-1772), it’s a move that is interspersed between several Verónicas that has its origin in the ancient Navarrese bullfighters.

It starts like a Verónica. However, the bullfighter turns in the opposite direction to that of the bull’s charge keeping both feet together to end positioned in front of the bull.

What happens if the bull is not fit?

If during the tercio de varas the bull displays any sort of physical impediment, it can be rejected.

In Spanish bullfighting only the president can take this decision, though the crowd can express its opinion and put pressure on him whistling strongly or shouting. The president uses a green handkerchief to return the bull to the corral.

As soon as the injured bull is out, a replacement one is sent into the arena.