What is flamenco? A complete introduction 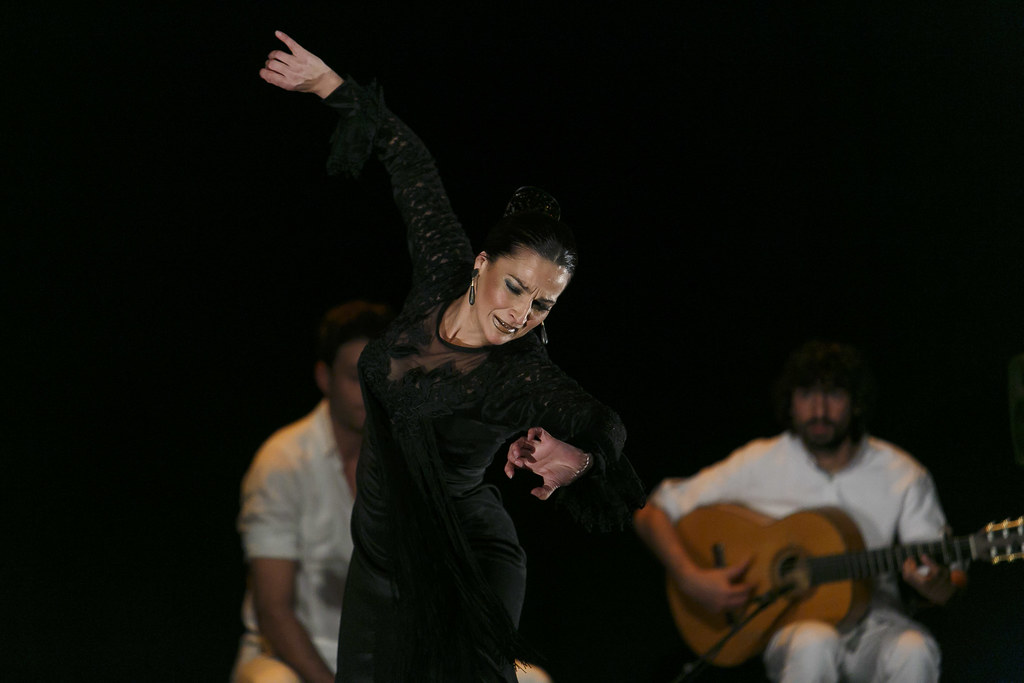 What is flamenco? Well, flamenco is a Spanish art form made up of three parts: singing, dancing and guitar playing.

Throughout time, globalization has brought flamenco to the world stage. But it has always been and will always remain an intimate art, with nothing else but the voice, the guitar and the body of a dancer moving elegantly.

So how does flamenco actually look and sound like?

Flamenco is a Spanish art form typical of Andalucía, the southern region of Spain, made up of 3 elements: song (cante), dance (baile) and music (toque).

Originally, it was the traditional dance and music of the Andalusian gitanos (gypsies). Even though flamenco is still deeply connected to the gypsy culture, many payos (non-gypsies) have contributed to expand it both in Spain and overseas.

The history of flamenco dates back from the 18th century. It’s said to emerge in the occidental area of Andalucía (Seville, Córdoba, Huelva). Unfortunately, the available resources and data are very limited and enforce just a few theories.

Is flamingo and flamenco dancing the same as flamenco?

Let’s start with the obvious…

A flamingo is a large wading bird. Its defining features include a long neck, long legs and feathers which vary in color from dark to light pink.

And while in Spanish, flamenco also means flamingo, please don’t confuse both!

Then, there is no such thing as flamenco dancing on its own. Flamenco is an art form made up of three parts, not a type of dance.

Flamenco is an empathetic and deep art

Flamenco is a state of mind, an art form that conveys the deepest emotions, usually melancholy and sadness.

In fact, it remains a quest for authenticity, for the pure expression of those human feelings that are both uniquely, intimately personal, and universally shared.

Despite the final result has nothing to do, flamenco and blues have many similarities. Both are very profound musical styles, where the lyrics often express loneliness and heartbreak stories. Actually, these styles rely on the performer’s ability to reach the audience.

Words can’t describe the feelings stirred by flamenco. Even if it’s the first time you listen to a song or watch a bailaora, something inside you changed as the music and the singing penetrate you.

It can either give you the goose pimples or you can’t stand it. You’ll surely “hate it or love it”!

And if you do love it, you’ll reach a unique bond with the artist. This is known as the duende. It means spirit and it’s the soul force inspiring flamenco art.

It has tons of expression forms and styles

As I explained before, flamenco can be expressed by either:

Traditional flamenco has a wide range of music styles.

These styles are called palos and are classified into 3 groups: Cante Grande (or Jondo), Cante Chico and Cante Intermedio.

Each palo has a distinct set of musical features in terms of rhythm, mode and lyrics. So each palo sets the tone, rhythm and mood of the music and dancing. Some palos will be dark, others lively, some will be fast, others slow…

Singing is the most important element

The heart of flamenco is the cante, the art of singing.

Original flamenco was comprised purely of singing and hand clapping. So the most compelling performance is surprisingly plain: a unique cantaor and one guitarist, both in perfect harmony and sat at wooden chairs facing the public and sharing their loneliness.

The songs are passionate, intense, deep and emotional. Traditional flamenco songs are usually unwritten, but passed down from generation to generation.

Also, flamenco musicians improvise to match the emotions of the singer. They do so by finger snapping, hand clapping and shouting. As a matter of fact, it wasn’t until the 19th century that the guitar was incorporated to the performance.

So, a true flamenco performance is always a unique storytelling experience.

And what about flamenco dance?

I told you before that in the early days, the cante was all that mattered. Dance was so unimportant, it’s not even mentioned in any early documentation about flamenco.

As a matter of fact, certain experts question whether there even was any kind of flamenco dancing before the 19th century. It was then that the cafés cantantes started to sprout and the guitar was also used as part of the performance.

Gypsies, in Spain and many other countries, danced long before flamenco started to become an art form. Certain engravings of their fiery dancing are proof of it. However, the styles and poses aren’t specific enough to confirm they’re referring to flamenco or anything of the sort.