6 tips for driving in Spain 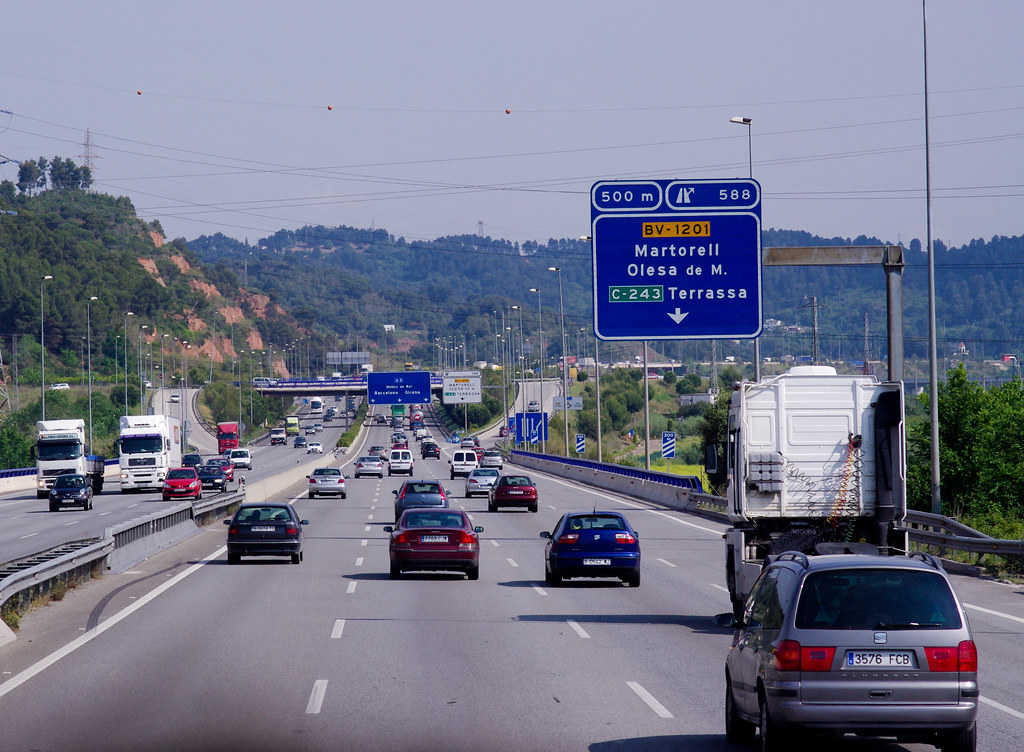 Will you be driving in Spain? If the answer is yes, then continue reading. It won’t hurt to know more about the requirements and Spanish driving laws.

Organizing a road trip in Spain is very easy. All you need is a rental car, a map and some free time. Spanish roads are safe and in good shape.

Have a look at a complete guide on where to book your rental car online.

1. Know the types of roads and gas

Spain’s road system is made up of motorways and main roads:

There are 3 different types of gas in Spain:

Leaded gas was abandoned in 2006 and it’s no longer available. Sin Plomo 98 has a slightly better quality, but it’s also more expensive. Unless your rental car specifies it, go for the Sin Plomo 95.

The filling procedure for gas stations varies from brand to brand. Generally, you first fill the tank yourself and then pay inside the store. Sometimes, you have to pay first. This applies during night hours (after 23:00 and until 6:00).

Gasoline is relatively inexpensive compared to other countries in the EU and Japan, but still more expensive than in the US.

In Spain, we drive on the right side of the road. This means that all traffic coming from the right has right of way (except when you are on a road that has right of way). You probably knew it already but this is a reminder for the left side drivers – you know who your are.

When driving on a highway, don’t overreact to cars flashing their headlights before overtaking you. It’s the law! It’s a warning sign to let you know they are about to pass.

Intersections of two highways typically have a roundabout under the higher one. So you can use it as a U-turn (completely forbidden in Spain) in order to start driving in the opposite direction.

Again, on a highway, never cross a solid white line. Wait for the broken line, and when overtaking, always indicate when you’re pulling out and back in. Spanish authorities are strictly enforcing this law, so don’t break it!

3. Respect the rules to avoid fines

Unfortunately, road accidents were the first non-natural cause of death until a few years ago. Therefore, the government and the DGT (Dirección General de Tráfico or Traffic General Direction) have severely increased driver’s obligations and traffic fines.

Here are a few traffic rules that you need to be aware of when driving in Spain:

4. Keep the mandatory documents and gear in the car

You must keep the following equipment in your vehicle while driving in Spain. If it ever occurs that you need to stop on the side of the road or hard shoulder (due to an emergency, accident or breakdown) use them.

In towns, the municipal police (Policía Municipal) are responsible for traffic control. On Spain’s highways the civil guard (Guardia Civil de Tráfico) are in charge, patrolling in cars, motorcycles and helicopters.

The first and most important piece of advice is to always follow the instructions of traffic police and be prepared to stop. The authorities often set up checkpoints and stop drivers at random to ask for their identity and vehicle documents. They are most of the time looking for drugs or criminals.

Spanish law says you must wear a fluorescent jacket whenever you stop by the side of a highway. So, if the Guardia Civil stops you, take your time to put it on before you get out of the car. Otherwise you’ll get an on-the-spot fine.

6. Pay your driving fines as soon as possible

Up to 300€ on-the-spot fines can be imposed for wide a range of traffic offenses. If you’re unable to pay an on-the-spot fine (multa) your vehicle can be impounded or immobilized. Alternatively the authorities may escort you to a bank’s ATM.

If you violate a traffic law in Spain you may lose points from the point-based driving license, apart from receiving a fine. The points’ lost will be applied to your drivers’ permit if your country uses this system.

Speeding fines depend on the degree to which you exceed the speed limit and it’s severely punished. You’ll receive a fine, could lose your license and up to 6 points, and even go to jail.

There is a leeway’ of up to 10% above the speed limit to allow for speedometer and radar errors. Being 30% over the limit is considered a very serious offense. If you’re caught by an unmanned radar trap, you or the rental company will be sent a photograph of your number plate. This picture is considered an irrefutable evidence of speeding.

If you’re fined, you receive a notification (boletín de denuncia) specifying the offense and the fine. Except in the case of an on-the-spot fine, you can pay at any post office, some banks or at the local traffic department. Always make sure that you receive a receipt for it.

This article is part of a complete tutorial about car rental in Spain where you can read all the information you need to organize your road trip around the country.

1. What’s the best way to travel across Spain: a road trip or take the train?
2. Traveling to Spain by car
3. 10 epic Spain road trips
4. How to book your rental car online
5. How to find cheap car rental rates?
6. 8 Rental car tips & hacks for your Spain road trip
7. Do you need an International Driver’s Licence?
8. Getting around Spain: rental car
9. 6 tips for driving in Spain
10. Car parking in Spain