How to get to Barcelona 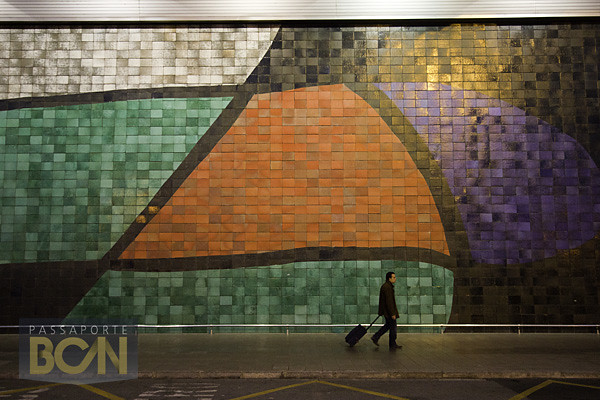 Barcelona is in the eastern region of Catalonia, 622 km from Madrid, 611 km from Bilbao and 996 km from Seville. If you plan to visit Spain and would like to include Barcelona into your itinerary, take into account that it’s the most popular tourist destination in the country so it’s extremely well linked both on a domestic and on an international scale.

You will find next an outline of the main means of transportation that will take you to Barcelona.

Getting to Barcelona by plane

The airport of Barcelona, officially named Aeropuerto de El Prat, is 13 km from the city center.

There is a special bus (called Aerobús) which connects the airport with the center of Barcelona. Depending on traffic, travel time is 45 minutes. Be cautious and always calculate a greater margin of time on the trip back to the airport, avoiding the anguish of being caught on a traffic jam.

The Aerobús airport bus has 2 different lines that follow the same route.

On the way between the airport and the center of Barcelona, both the A1 line and the A2 line stop at: Plaça Espanya, Gran Via-Urgell, Plaça Universitat and Plaça Catalunya. Both Aerobús lines final stop is in Plaça Catalunya.

The cost of is definitely cheaper than a taxi and the vehicles are adapted to transporting suitcases.

However, if you are traveling with lots of luggage and your hotel is not along the Aerobús route, you will still have to take a second transport in Barcelona (in this case, the subway would be a better option). For groups of 4 or more people the cost is very close to that of the taxi.

Taxis are located outside each terminal.

It’s without a doubt is the fastest, most comfortable and safest way to get to your hotel.

But it’s also the most expensive option. There is no flat rate to the city. The price of the ride can range from 30€ to 35€, depending on the time of day and the day of the week.

The local train (also called Cercanías or Rodalies) is the cheapest option to get out of the airport. Paying the trip with a T-10 ticket, the cost is very low, and you can still use the metro in Barcelona with the same ticket (always within a period of 75 minutes).

Nevertheless, the train station is in Terminal 2 of the airport. If you’re arriving at terminal T1, you’ll have to travel to terminal T2 to catch the train (there is a free shuttle bus connecting both terminals). The train departs every 30 minutes. Depending on the location of your accomodation in Barcelona, you will still need to take a second transport in the city.

The subway L9 (orange) arrives to terminals T1 and T2 of Barcelona airport and has a higher frequency higher than any local train. It’s also a cheaper option than the Aerobús special airport bus.

The departure (and also the outward) journey from the airport requires a special ticket. The journey is quite time consuming compared to the local train. To get to the central areas of the city you’ll need to change lines.

How to get to Barcelona by train

Your best option to reach Barcelona by train is the Spanish high-speed train, known as AVE, operated by Renfe. Taking that into account, you can buy train tickets to travel from Madrid, Seville, Cordoba or Zaragoza to Barcelona.

There are two train stations in Barcelona: Estaçió de França and Barcelona Sants, which is the most important one and where AVE trains arrive to and depart from. It’s located in the west of the city, in the Plaça dels Països Catalans.

If you want to know more about AVE high-speed trains, an extremely comfortable and reliable means of transportation, we suggest you to read A Complete Guide About Train Travel In Spain.

The train station of Barcelona Sants is situated to the west of the historical center of the city.

Taxis are just outside the station, waiting for passengers to arrive.

Due to the proximity to the center of Barcelona, the taxi is our preferred option to get out of the train station without major complications. Depending on the traffic, it’s not the cheapest option but it’s definitely the most comfortable one.

You can do so using one of the two lines of the Barcelona Metro (subway), the L3 (green) and the L5 (blue). Depending on the location of your lodging, and especially if you don’t have to do any transfer to another line, the Metro can be an great and cheap option to leave the train station.

The Barcelona Sants station is served by several local train lines that lead to other stations in central parts of Barcelona. Depending on the location of your hotel, the local train may be a good option.

If you arrived in Barcelona by AVE, take advantage of the Combinado Cercanías and you won’t need to pay for the local train (also called Cercanías or Rodalies) ticket.

The Barcelona Sants train station is served by several urban bus lines, but I don’t recommend them because the buses aren’t adapted to transporting suitcases. Buses can get crowded at the station and you may have trouble getting into them. Obviously, you’ll also need to know the bus route to know where to get off.

Getting to Barcelona by bus

There are numerous bus routes across Spain. They are an option for travelers with limited budgets, as the traveling time is usually long.

The journey time between Madrid and Barcelona is 7 hours and 30 minutes. Buses leave Madrid from the Estación Sur de Autobuses and there are several departures throughout the day. And you can easily purchase your bus tickets online.

The travel time between Bilbao and Barcelona is 8 hours. The company that operates the service is Alsa and there are several departures throughout the day. Buses depart from Bilbao from Termibús de Bilbao. And you can easily purchase your bus tickets online.

The journey time between Valencia and Barcelona is 4 hours. The company that operates the service is Alsa and there are several departures throughout the day. Buses depart from Valencia’s Estación de Autobuses de Valencia. And you can easily purchase your bus tickets online.

There are two bus stations in Barcelona: Barcelona Sants and Barcelona Nord, which is the most important one. It’s located in the center of the city, in the Carrer d’Alí Bei.

If you are going in the direction of Plaça de Catalunya or the Camp Nou football stadium, you should take the 54 bus line.

Go to the Arc del Triomph stop (just one block walking from the bus station) and take L1 (red) of the Metro (subway).

Taxis are just outside the station.

The taxi is an interesting option if you are in a group of 4 people or just don’t want to get a more complicated option. The ride to any address in the city center is short.

How to get to Barcelona by car

On the section How to move around Barcelona we explain why having a car in Barcelona is not a good idea.

But then, you might be renting a car as part of a wider trip taking you to other destinations in Catalonia and elsewhere in Spain. If that is the case, bear in mind your car will not be of any use in Barcelona.

If you are spending a few days in Barcelona, our best advice is for you to choose a hotel providing a car park where you can leave your vehicle during the duration of your stay in Barcelona (for more information, read Where to stay in Barcelona).

Also be aware that the city hall operates many traffic restrictions in the city center. To avoid a fine, inform your hotel of your arrival so that it can ensure that your car is not fined.

How to get to Barcelona by boat

There are two ways to get to Barcelona by boat:

Many cruises begin or end their trip in Barcelona. And the city is also a very popular stopover among cruises sailing the Mediterranean. You will find cruises of all sizes, prices, duration and itineraries.

Alternatively, several shipping companies have regular ferry services between Barcelona and other destinations in Spain, Italy and Morocco. The companies are: